Is Online Advertising Really the Future? (Hint: Maybe Not) 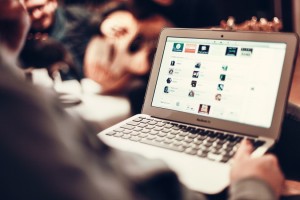 We all know that online advertising is cheap. It allows you a 24/7 span of exposure globally and is easily attainable, unlike TV broadcasting slots and newspaper ads. From a 2015 point of view, the online advertising business model is well-known and sensible: it allows internet users to access information and other content online for no monetary fee. But there is a price to pay. From a user’s perspective, that price is to tolerate what is regarded as an annoyance of not-so-subtle ads that linger around the content of their screens or pop-up to mask their desired view. Some may even feel offended by these ads, viewing them as a violation to their privacy, despite the fact that user responses are much friendlier to tailored ads based on previous searches conducted on the Web. From a business’ perspective, however, this business model is based on a fair bargain that allows and encourages dissemination of information in exchange for the mere opportunity to pitch their product to users. But not many people are aware of this reasonable bargain: all they want is free internet with no intrusive ads (as various studies have shown, this is especially true to low-interactivity Web sites). And so a superhero emerged to save frustrated users of the internet, who normally adjust their vision to exclude internet ads anyway, from enduring such a nuisance by automatically blocking online ads when installed. That hero, or dare I say anti-hero, is called Adblock.

Although various sources are disputed about the number of downloads/users of Adblock, it is undeniable that the number is large (between 200 to 400M worldwide – an astronomical increase since 2.5M in 2009) and growing. It is therefore of vital commercial importance to understand the future of this enterprise and how it is likely to affect your business strategy. However this likelihood is vague and possibly varied, considering the scintilla of legal precedence currently available.

Although back in 2009 when Adblock was only 2 years old, there were differing views on whether it would significantly impact the online publishing business sector; there is now a consensus that it has a pronounced detrimental effect. For instance, in a study conducted by Pagefair, Google lost an estimated $887M from its revenues in 2012 as a result of marketers being unable to reach their consumers’ computer screens. In 2014, ProSiebenSat.1, a German media group, declared losses of $10.4M (around one-fifth of its web revenues). Other publishers shy away from revealing losses in revenue resulting from ad-blocking. Nonetheless, in acknowledging this non-avoidable phenomenon, Mike Zaneis, general counsel at the Interactive Advertising Bureau (IAB), admitted “Ad blocking is beginning to have a material impact on publisher revenues”. The natural byproduct is an increased willingness of publishers to strike back with legal action.

So far, only 2 legal actions were brought to court in Germany by German broadcasters RTL and ProSiebenStat.1. The Hamburg court rejected the argument, in both cases, that Adblock was anti-competitive on the grounds of user consent to install the software and its not-yet-dominant status in the online publishing market. Following these wins, the CEO of Eyeo (the company responsible for Adblock), boasted “We hate to keep reporting yawn-inducing, self-evident news, but it’s our duty to inform you that ad blocking has been found 100 percent legal (again)”.

But the legal battle is far from over. Although the German courts were applying provisions of EU law, other member states are not bound by the German interpretation and may rule differently on the question of Adblock’s legality. However, since the UK does not have a tort of unfair competition, it is uncertain on what grounds one may retrieve their losses caused by ad-blocking especially considering failed claims under copyright law on TV commercial skipping in the US. Either way, it is probably best to avoid the courts and turn to practical and cost-friendly solutions.

The good news is that Adblock, itself a business, has a legitimate interest in not making too many corporate enemies. It is therefore flexible enough to make highly profitable deals with the likes of Google to ensure their sites end up on the self-proclaimed ‘white list’ and not be subject to ad-blocking. This may seem unhelpful to SMEs, but Adblock has insisted that its charge for “support services” has little to do with whether your ads will be white-listed. There are certain criteria to be met by ads that wish to reach consumers’ screens, including being static (no animations, sounds or similar) and not obstructing the content of the webpage (e.g. pop-ups).

Alternative solutions lay in pleading with consumers or fighting back. For instance, the Guardian has used an informative approach, relaying the message “We notice that you’ve got an ad-blocker switched on. Perhaps you’d like to support the Guardian another way?” On the other hand, Hulu and Firstrowsports.eu, both online video and streaming services, restrict users from accessing their sites when they attempt to block their ads.

Perhaps it’s time to receive user responses as constructive criticism towards your digital marketing strategy, rather than as acts of selfishness. There is now a standard of consumer-friendliness that must be adhered to when it comes to creating online ads, and by extension a truism to be reiterated: less is more.