In our last blog we looked at the important markers of success for retail businesses and the main drivers of the sector in the North West.

Now let’s look a bit closer at retail health in the region – are the cash registers ringing or the shop floors silent?

A look around online throws up a mixed picture – the general consensus is that while there are green shoots of optimism for retail across the country, we are by no means out of the woods yet.

Also, retail rental levels in the North West improved more than any other region outside London during 2014, (GB Retail Report, Colliers International) with a decline of one per cent in retail rents, compared with a fall of 5.5 per cent in 2013. The number of retail centres in the region with stable rental levels rose from 12 to 31. This is still nowhere near pre-2008 levels, but it’s a pretty encouraging picture.

Postings for retail vacancies in the North West increased by a third between October 2012 and October 2013, from 1,500 to 1,950 (Innovantage), another sign of emerging growth in the sector.

Liverpool has also established itself as one of the best performing retail destinations in the country in recent years, in large part due to the success of shopping district Liverpool One. The city has seen one of the largest decreases in empty shops nationwide. Between October 2013 and April 2014, the percentage of vacant or void shops in Liverpool fell to 11.8 per cent from 14.4 per cent, compared to 16.3 per cent in October 2010 (National Retail Barometer by Colliers International Q3 2014).
In other positive news, Crewe-based Bargain Booze has this month reported a four per cent jump in pre-tax annual profits driven by wine sales and is expanding its store numbers.
The North West has also seen a significant rise in the number of independent retailers, perhaps reflecting consumers’ loss of trust in High Street chains over the past few troubled years. 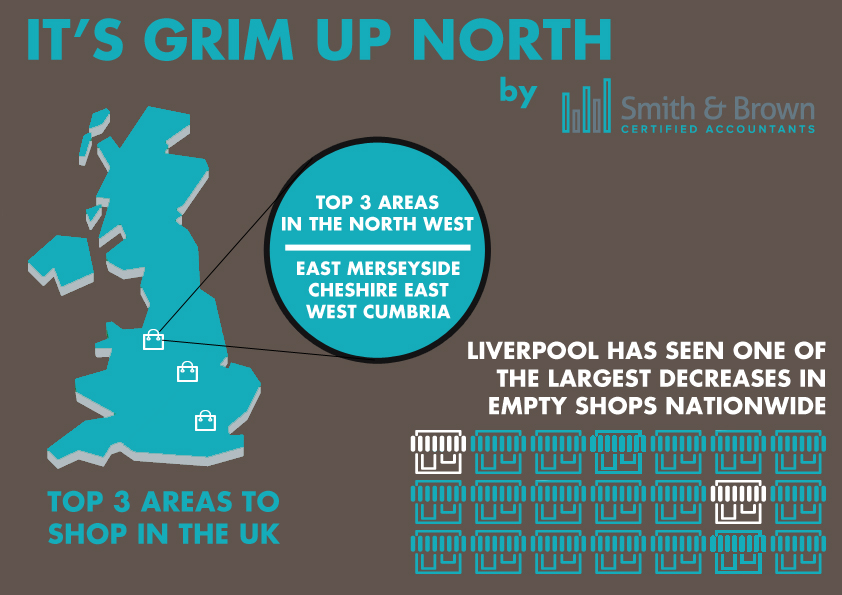 However the number of store closures by multiple retailers (shops with more than five outlets) in the North West in the first half of 2014 stood at 542, against new store openings of 410. This is a net reduction of 132 shops, double the net change in 2013 when there was a reduction of 65 shops, according to PwC research compiled by the Local Data Company.

This research paints a disheartening overall picture for retail closures nationally. Last year the number of retail premises left empty almost tripled, with the biggest casualties mobile phone retailers – largely due to the collapse of Phones 4U.

Overall, it’s a cautiously optimistic picture of a regional retail sector where businesses are starting, if not yet thriving. North Westerners are clearly entrepreneurial, ready to pick themselves up when the economy knocks them down.

There are, of course, challenges ahead, as we will explore during this blog series.