Trick or treat? Bull or bear?
One might reasonably ask if the market is playing one big trick on us at the moment. I’ve often said that sometimes the markets are easy and sometimes they are hard. It’s been incredibly difficult for a year now, and just when it seemed like we were getting some clarity with what looked like strong evidence for a new bear market, we are thrown back into uncertainty. It’s enough to make some people want to give up on the markets and find an easier way to make money. Not me though.
We’ve had a year of extreme volatility and choppy, whipsawing conditions that can make the market look terrible one month and great the month after, leading some to conclude that stockmarkets are just too difficult. It’s very easy to forget the more or less straight-line move higher in 2013-14 when it was all pretty straight-forward. And it’s also easy to forget what sentiment was like much more recently. Right now, with US indices having gone up for a fifth week in a row, you’ve probably started to forget any fear that you might have felt just two months ago when markets were plunging. We need to be wary of price action conditioning and not allow it to have undue influence.
2016 will be my 30th year in the markets. Certainly I need all that experience now to try and make sense of what’s happening. Let’s start as usual by looking at the Dow. Four weeks ago it was at 16472 and it is now 17663. Clearly the congestion area that I was expecting to act as a continuation pattern didn’t work. I am surprised by that. The pattern itself has a baseline probability of around 2 in 3, but given the speed and extent of the prior move down I would have put its chances considerably higher than that, and it’s a pattern that has delivered many, many times for us. Instead, the Dow has rallied strongly and has come back to resistance: 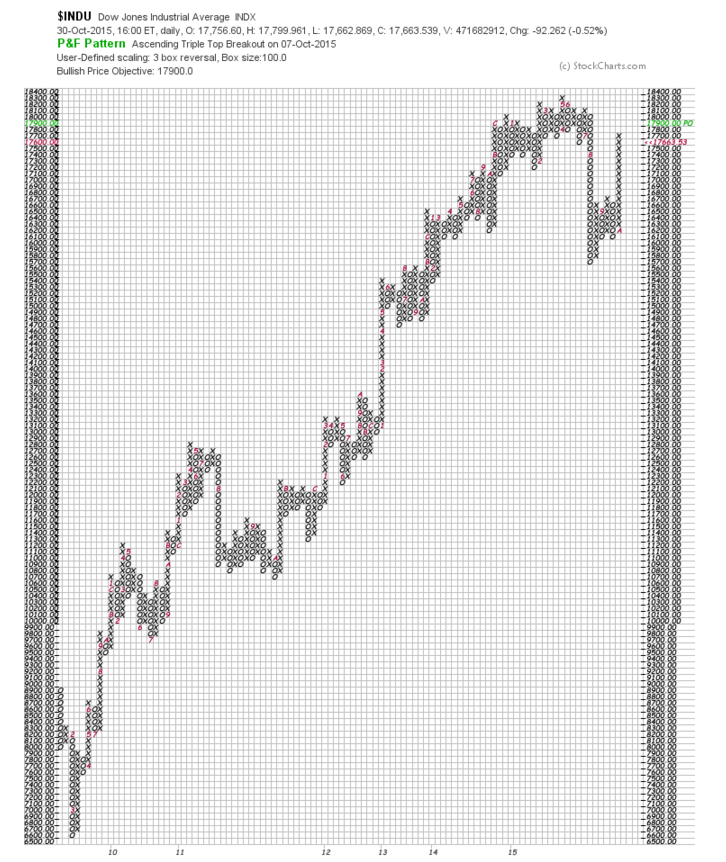 So what now? Well, on it’s own the resistance might be considered sufficient to halt further progress, but there are other factors too. As I mentioned, we’ve just gone higher for five weeks in a row, something that hasn’t happened for a year. If you look at the weekly bar chart however, this fifth week doesn’t look convincing compared with the other four because it has a much smaller range and only managed to close 16pts higher on the week.
In addition, the shorter-term indicators are giving a clear warning. The extension above the 20 day moving average was 2.3% at Friday’s close which of course isn’t extreme, but it was 4.5% extended on Wednesday which is. The 7-day RSI was at 85 on Wednesday and is now 75.
All these factors point to the strong possibility that the rally may be ending. But what if it isn’t? At what point do we have to concede that remarkably the bull market didn’t end in August and is still ongoing? There’s a fairly easy answer to that and it’s as per my Interim Report of 20 October; we would need to see new all-time high’s. However, that’s not quite as simple as it sounds because what if we get an ATH on one index but not others? The Nasdaq100 has come very close, but the Dow, S&P, Nasdaq Composite and Russell2000 would most likely not make an ATH at the time the Nasdaq100 did, if indeed it does. For now, at least, it’s a reasonably definitive situation, and we don’t have to regard it as a bull market at the moment. Even if some of those indices did make it all the way back up and beyond, the manner in which they would have got there would still leave me feeling uncomfortable and a sense that the market was vulnerable.
I should add that it would also be one of the most surprising things I’ve ever seen in my career. The price action we’ve seen lately doesn’t look or feel right, and if after being smashed up in August the markets are back to ATH’s just a few months later, I’d be left with a feeling that something wasn’t right either about the move down or the move up. By the way, comparisons with 2011 wouldn’t really be appropriate here – following the big drop in August 2011 it took seven months to regain the lost ground, and the move back up did not make an ATH.
Last time the S&P was at 1951 and it’s now 2079. The picture here is very similar to the Dow with the rally now encountering resistance: 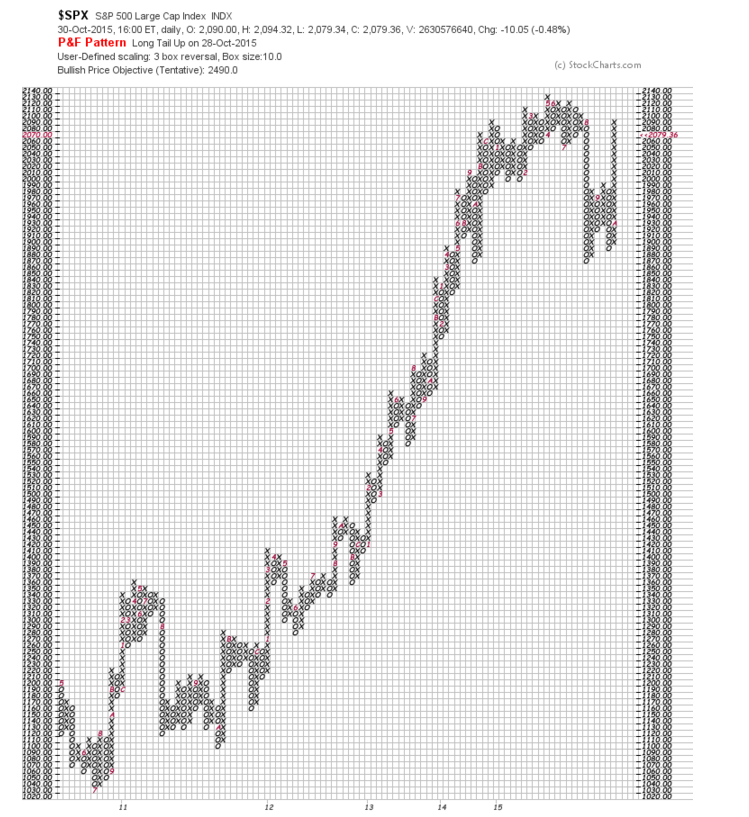 It is perfectly possible of course that what we’re seeing on both indices is a double top forming. One should never jump the gun on patterns – they must be allowed to complete – but if it is a bear market then that would be a candidate.
Like the Dow, the S&P was in a very extended situation on Wednesday with a value of 4.3%. That has reduced to 2.3%. The RSI didn’t make it as high as the Dow, reaching 77 and coming off to 67 as at Friday’s close.
Four weeks ago the Nasdaq100 stood at 4267 and it’s now 4648 having come within a whisker of its ATH during the week. As you can see, the chart has an unreal look about it: 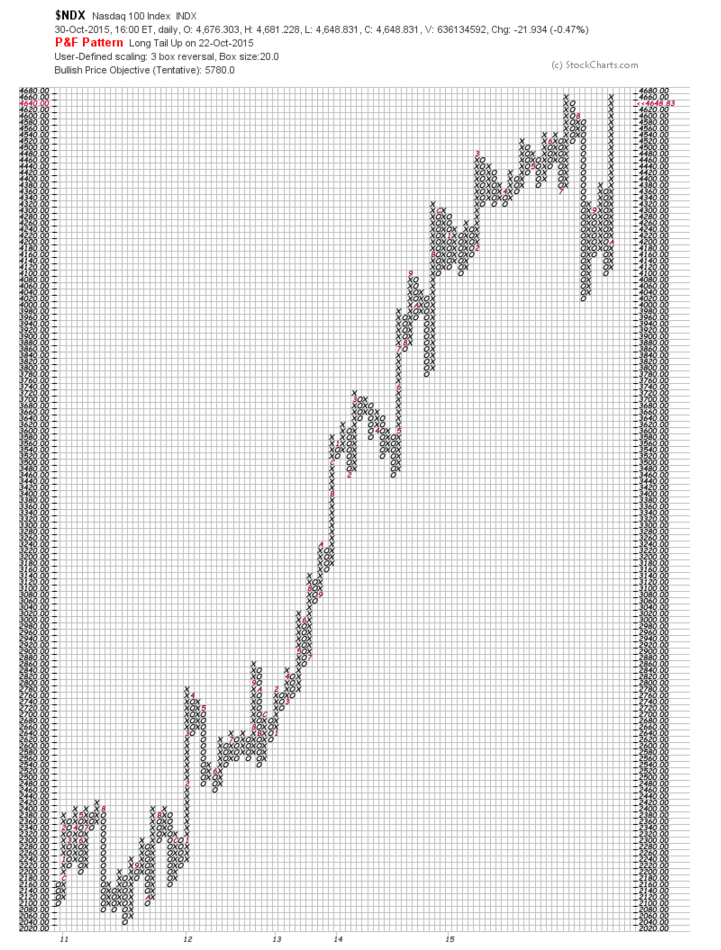 That sort of thing just doesn’t happen, i.e. a straight-line plunge (on that scale) followed shortly after by a straight-line recovery. Even with three decades of chart-watching, I’m struggling to make a meaningful assessment of that piece of price action.
As well as a bizarre chart, the numbers on the indicators have been pretty extreme too. On Wednesday, the extension to the 20ma was 6.5% which is the highest since 2011. At Friday’s close that had fallen to 4.0%.
The one chart that’s not giving me a headache at the moment is the Russell2000: 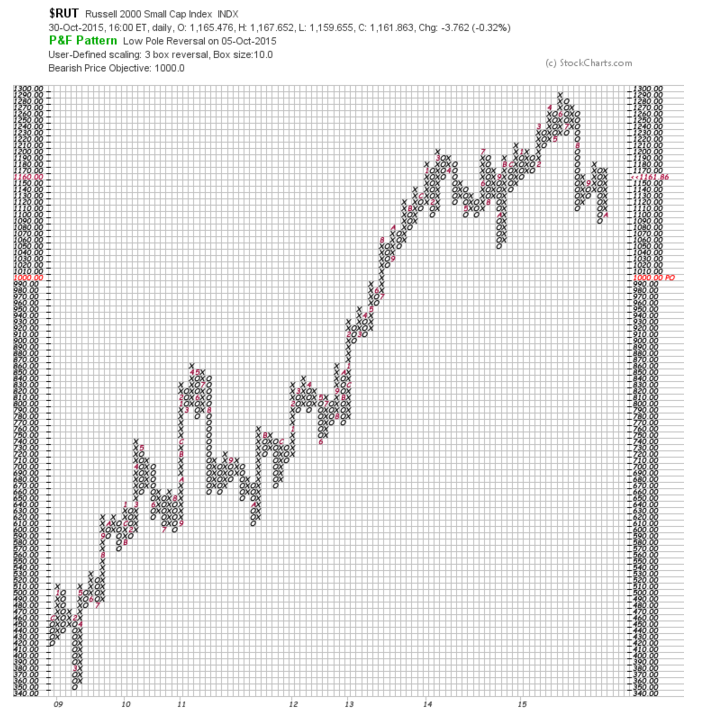 The rally here hasn’t gone anywhere near as close to the high as the Dow/S&P/Nas and the chart still retains much of the top characteristic as in my previous report.
(c) Robert Newgrosh 2015