Without question, the last few months have been the most difficult analytically since I started writing my reports eight years ago. There were testing times in 2010/11/12 when euro-zone worries caused sharp downward moves in all indices, but I was convinced about the bull market and said each time that prices would recover and bullish conditions would return. So it proved. While each of those was a test, at least they only came at me once a year. What we have seen recently can only be described as bizarre, leaving me wondering if North Korea has also been hacking the computers at the NYSE as well as Sony.
Let’s consider some of the price action lately. In October, we had the first failed medium-term signal on a US index since 2002 – the LCM on the S&P. On the Dow, we saw a fall of 1495pts in four weeks which was completely recovered in under three weeks, i.e. the market rose much faster than it fell reversing the normal law of “gravity” in the markets. That move extended further and ended up as a 2136pt move higher in seven weeks, each of those weeks being up. We then saw a fall of 924pts in seven trading days, and on the weekly bar chart the gains from the previous five weeks were wiped out in just one week. Then, bringing us up to last Friday, there was a move higher of 807pts in three days. (figures based on intra-day highs & lows)
But that’s not all. In the crazy seven-week move higher, the 7-day RSI reached 92, and got stuck above 90 for a week. This was the most overbought condition as measured by the RSI for 18 years. During that move, 26 out of 35 days were up, i.e. 74% compared with the long-term average of 55% for a bull market. But wait, just twelve days after seeing a level of 90 on the RSI, it was back down at 14.
But just when you think it can’t get more extreme, it does. Last Tuesday volatility was utterly insane. In the morning (basis IG daily future) the Dow fell 235pts in 1.5hrs. During the afternoon, it rose 392pts in 4hrs. Then in the evening it fell 363pts, also in 4hrs. Total distance, 990pts.
Yes, 990pts covered in a single day. On Thursday, the Dow rose 421pts, the biggest points move in either direction for three years. Good grief, I’m an analyst not a prophet – give me a chance!
So if I haven’t been onto all of that, I hope you’ll understand why – it’s totally impossible to call by any method. All this has happened since mid-September, but it feels a lot longer than that. I can’t recall so much bizarre price action happening in such a short space of time.
So, let’s try to make sense of the charts at the moment, if that’s possible. Interestingly, the Dow is almost exactly at the same level as it was four weeks ago. Then it stood at 17810 and it is now 17804 giving the totally false impression that not much has happened in the meantime. Take a look at the 50pt chart: 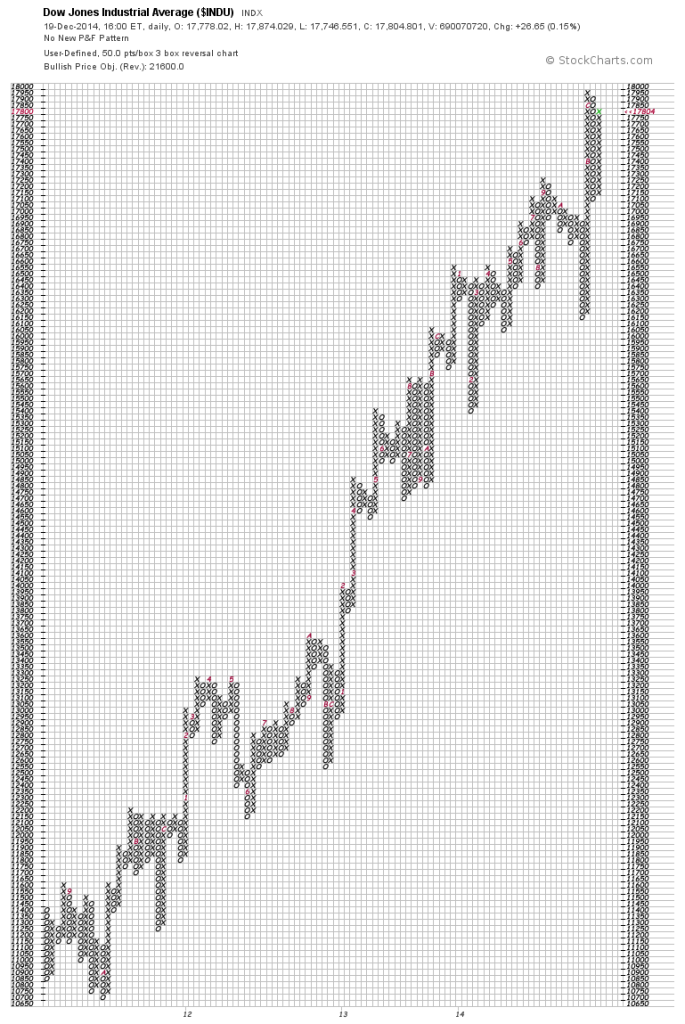 I warned last time that the big column of x’s didn’t feel right, and with an RSI above 90 something had to give. That was correct. I now think we are seeing a consolidation area forming – basically a larger than normal congestion area. When volatility goes sky-high, it always comes back to normal with time, so I think we are going to see some dust-settling and the oscillations should start to dampen down. I did say in my last report that even a substantial correction wouldn’t alter the bigger picture, i.e. we’d still have a bullish situation overall, and that is clear if you look at the 100pt chart: 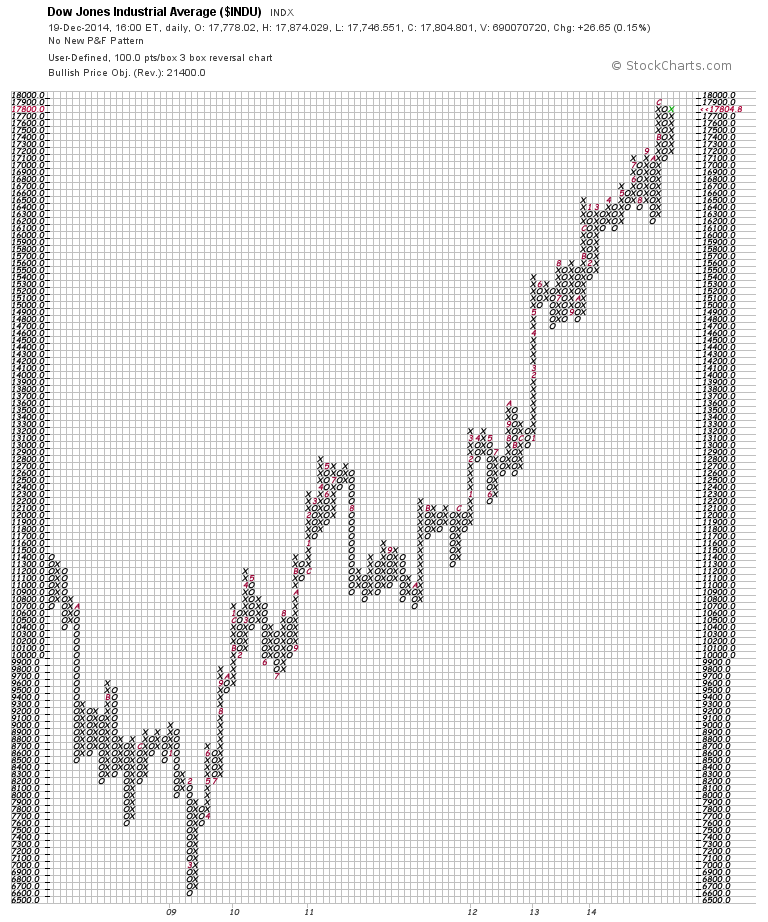 So the bull market is still intact. I’m still in cash with my pension, and interestingly for a short time last week the Dow was below the level I came out at. That’s not the case now though, but to be honest I’m really not sure how much I’d have enjoyed the roller-coaster ride had I stayed in. The principle reason if you remember for coming out was that the Dow had reached my target and I had substantial gains built up over five years which I didn’t want to risk. Still, the question remains when to re-enter, and the answer in part is when market conditions return to something I can regard as more normal.
When I wrote my last report the S&P500 was at 2063 and it has moved up to 2070 which also of course disguises the drama in-between. The chart clearly shows the uptrend: 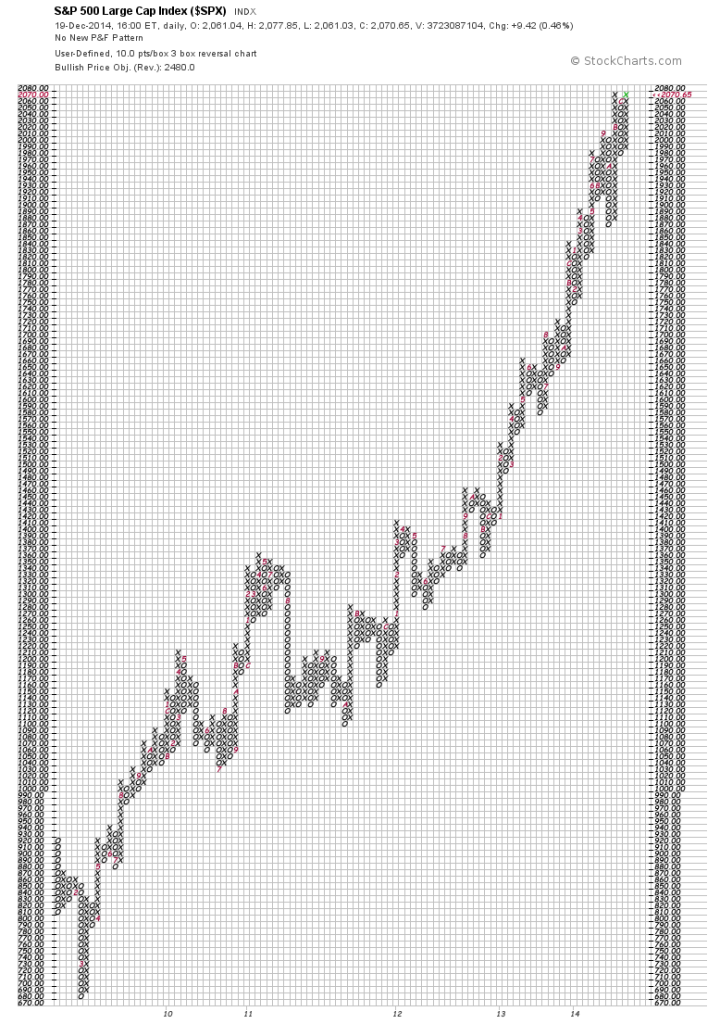 There’s not much more I can say about the failed LCM than I did last time. Failed major signals are rare, but whoever said the success rate was 100%? Not me.
(c) Robert Newgrosh 2014
All rights reserved. No part of this publication may be reproduced or transmitted in any form or by any means, electronic, mechanical, photocopying, recording or otherwise, without the prior permission in writing of the author.  (So please do not forward it to anyone else)