Four weeks ago the Dow stood at 18140 and it is now 18127. The recent correction did not alter the bigger picture as you can see, and illustrates perfectly how Point & Figure keeps things in perspective: 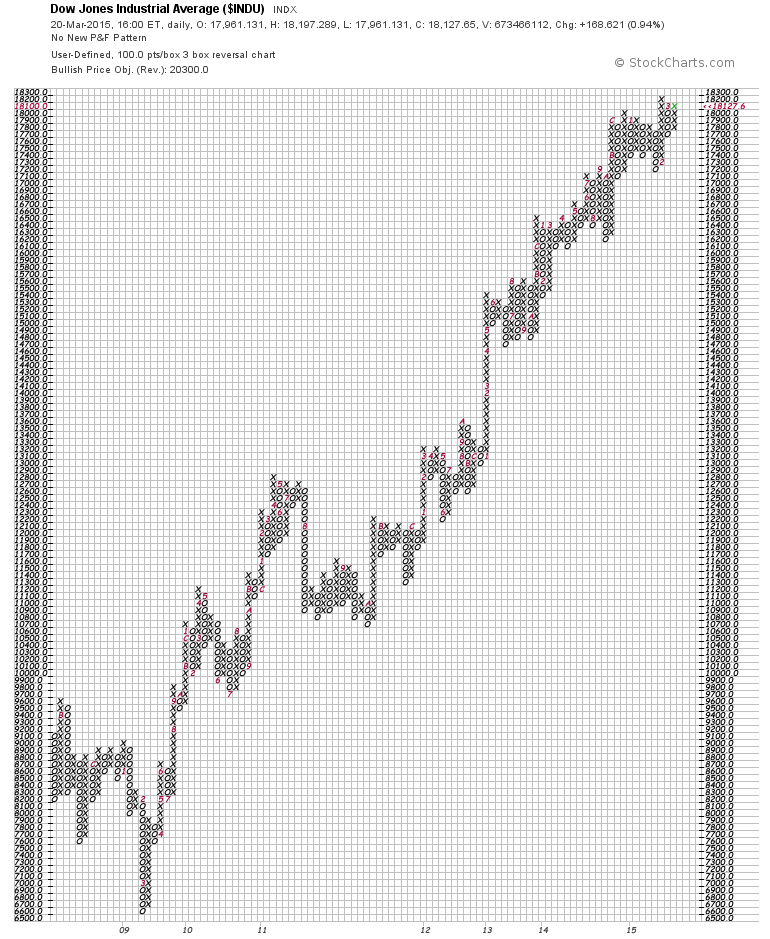 There’s no reason why the Dow shouldn’t make further ATH’s from here, and given that we’ve just had a 700pt correction, we should be in the clear for a while. Just a small educational point; you can’t see all of the 700pt move on the P&F chart because of the way the “whole unit of scale” effect works. Plus of course P&F is based on the closing price, so intra-day highs and lows won’t be included. To see the full 700pt move, you need to look at the bar chart, but if you get too close to it you can lose your perspective.
Like the Dow, the S&P is slightly down on the month having fallen from 2110 to 2108. It has a similar chart and I would naturally expect that it will also make a new ATH fairly soon: 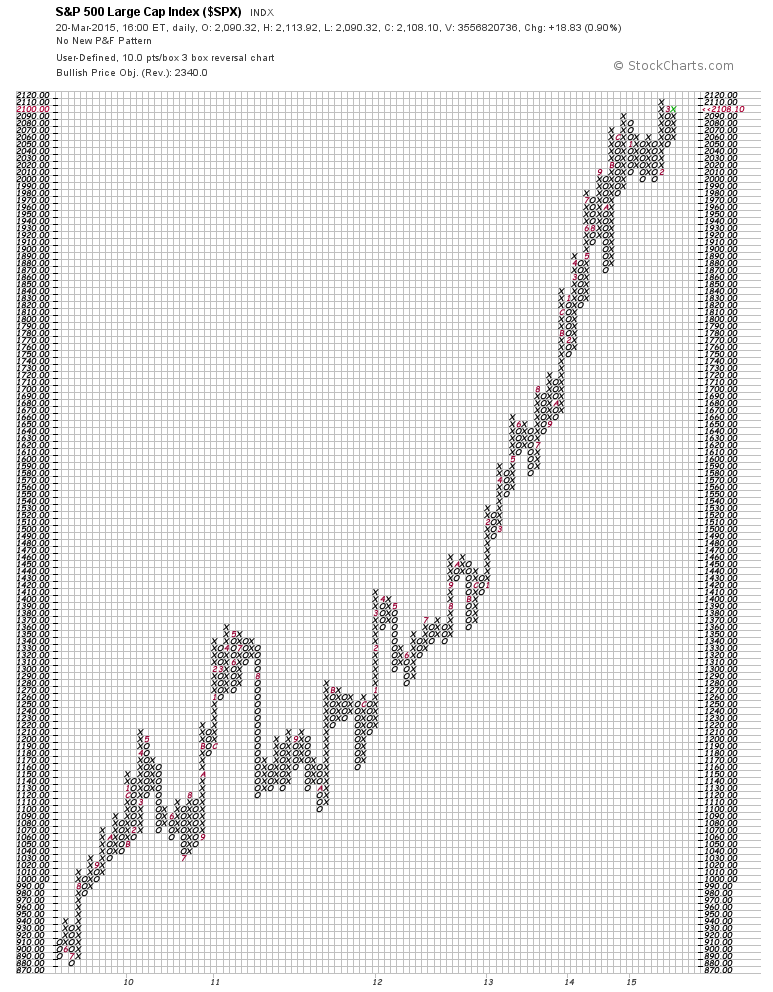 The Nasdaq100 is now 4458 compared with 4443 last time. Again there’s no reason why the uptrend shouldn’t continue: 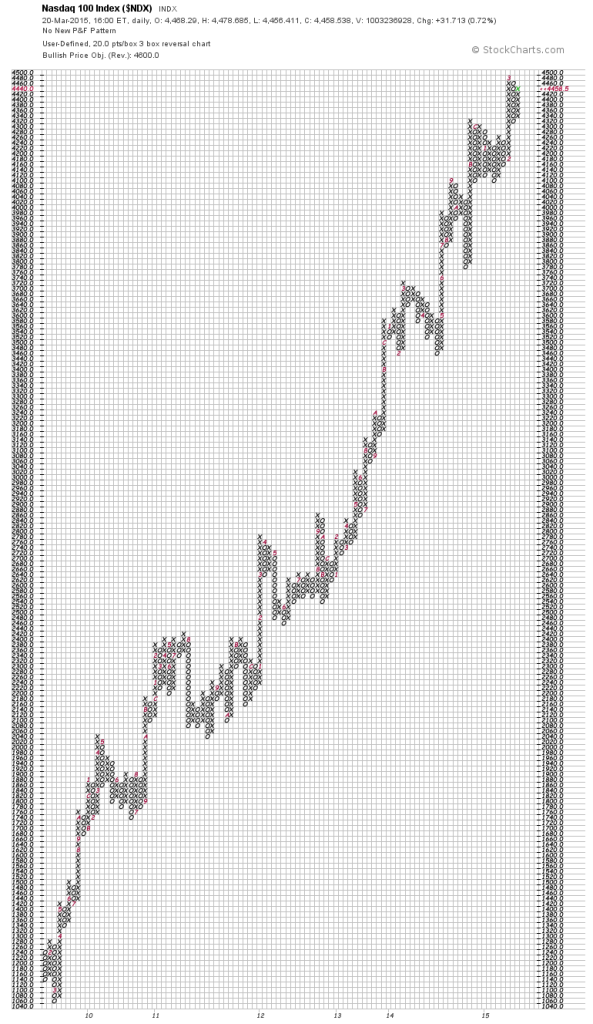 The Russell2000 is looking good as well: 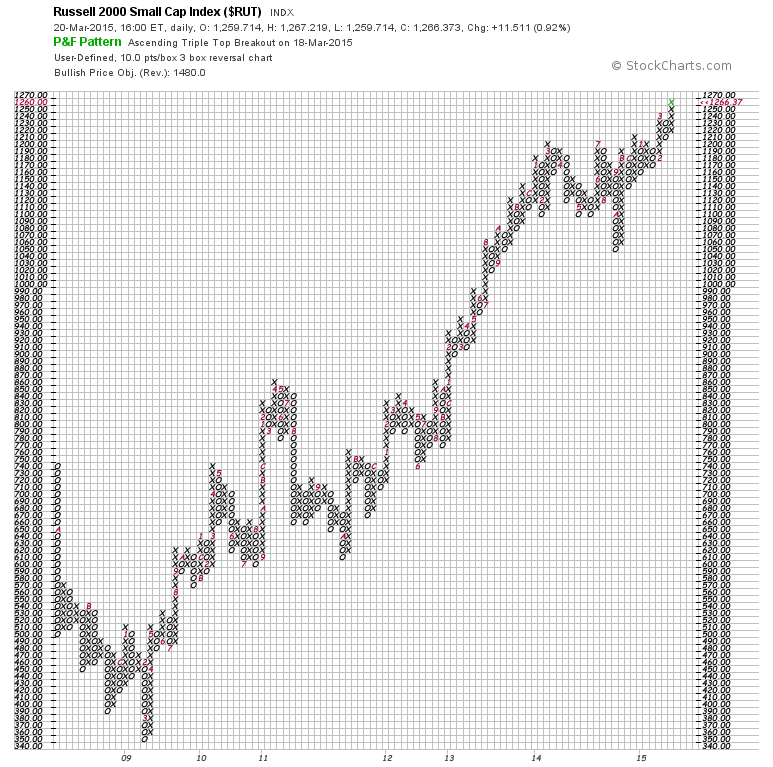 The bull market in the US and Europe is now six years old. I did say right at the start in 2009 that it would last longer than average, and that has been spot-on. However, the longevity is something of a problem. You might expect a bull market to last four years, so in the first and second years it’s pretty straight-forward to say “it ain’t over yet”. The law of averages is on your side here and I took full advantage of this in 2010/11 when we had sharpish corrections. But now we’re entering the seventh year, it’s not so obvious. The bull market could in theory end at any time, although there is no technical evidence that it is about to. But clearly it’s more difficult to predict because we are entering year seven rather than year two or three of a bull market. It’s a tricky one – the charts say there’s more to come, the calendar says be mindful of the cycle.
(c) Robert Newgrosh 2015
All rights reserved. No part of this publication may be reproduced or transmitted in any form or by any means, electronic, mechanical, photocopying, recording or otherwise, without the prior permission in writing of the author.  (So please do not forward it to anyone else)