“The race is not always to the swift, nor the contest to the strong, but that’s the way you want to bet”
It is clear now that the Large Contra Move on the S&P500 didn’t work. In my Interim Report of 31 October I said that we could easily see all-time highs on the Dow and S&P, which would confirm the failure of the signal. That in fact happened later that day. (The report was sent out in the morning)
As I said in the main report on 26 October, the LCM was twice the average size of previous corrections which meant it was the minimum to qualify as a signal. Hindsight is a wonderful thing, but if you look at the chart again at the time (the P&F charts in reports are frozen so you can do exactly this) I think it was absolutely valid to call it a Large Contra Move. No pattern or signal is 100%, but because we haven’t had one go wrong on US indices since 2002, it is bound to be something of a surprise to get one.
Well, we just have to take the rough with the smooth, but I still maintain that it would be hard to beat the performance of our techniques over the long-term, and as I showed in the Interim Report of 8 November, during the period Sep07 to Jul14 my pension gained 97% by moving in and out of the market as per the reports, whereas the gains for the FTSE, Dow & S&P were 7%, 28%, 34% respectively, excluding dividends. Even Warren Buffett’s Berkshire Hathaway trails behind.
One thing worth mentioning is that I came out of the market with my pension when the Dow was 17100. The index then plunged and touched a low of 15855. It is quite possible that had I not come out at 17100 that I might have got worried around 1000pts lower and bailed out. Clearly I was right about the market being vulnerable at 17100 because a fall of 1245pts ensued. What I didn’t expect – and I think it’s fair to say no-one did – was a move back up in a straight line of 2000pts which was quicker than the move down. That is simply off the scale as far as normal markets are concerned and goes completely outside what even a robust method of analysis can cope with.
Just to give you some perspective on how extreme the market’s behaviour has been, the 7-day RSI on the Dow is at its highest level since 1996.
That’s right – as measured by the RSI it’s the most overbought for 18 years with a value of 90, and atFriday’s intra-day high the level was 92. Remember, we normally consider 80 to be overbought. Now, the only way you could justify buying into that is if you employ a “this time it’s different argument”. Well history shows it never is. Remember when FTSE went up 14 days out of 15 only to collapse straight after? I’m not saying that will happen to US indices and of course FTSE is a rogue index, but there was a certain sense of “we’ve got to get in, this time it’s different” as that FTSE sequence was becoming mature.
So, I may be missing out at the moment, but an RSI of 90 is not an ideal entry point to say the least. There will come a much better opportunity to re-enter what is clearly now an on-going bull market, and I will be patient and wait for that. Let’s take a look at the charts.
The Dow was at 16805 four weeks ago, and is now 17810. Take a look at the 50pt chart and see how weird it looks: 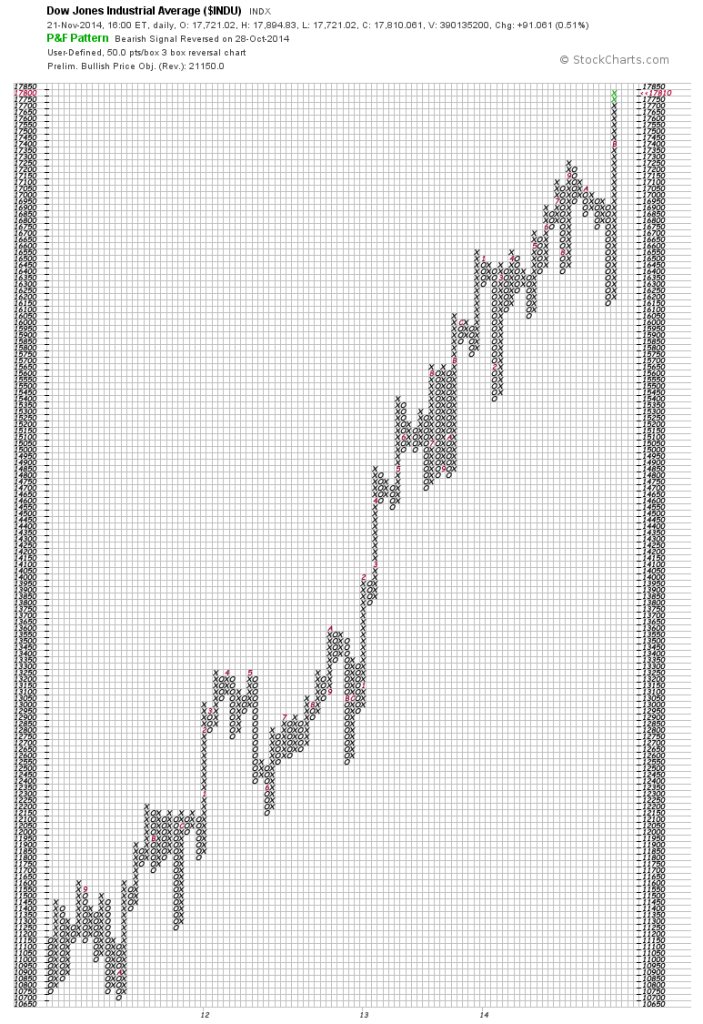 To me, something doesn’t feel right about what has been happening, and one of the basic rules that we take for granted has been turned on its head with the market rising faster than it fell. It has covered 3500pts in nine weeks which is an astonishing distance. As I said, we now have the most extreme 7-day RSI since 1996 and a sequence of moves on the daily chart that looks bizarre. After a move up of several hundred points it would be perfectly reasonable to see some “profit taking” or at least a correction which is attributed as such. We’ve just gone up 2000pts in a straight line and there’s no profit taking in sight. Why not?
The 100pt chart looks more normal and allows us to see that even a fairly substantial correction would still leave us in a bull market: 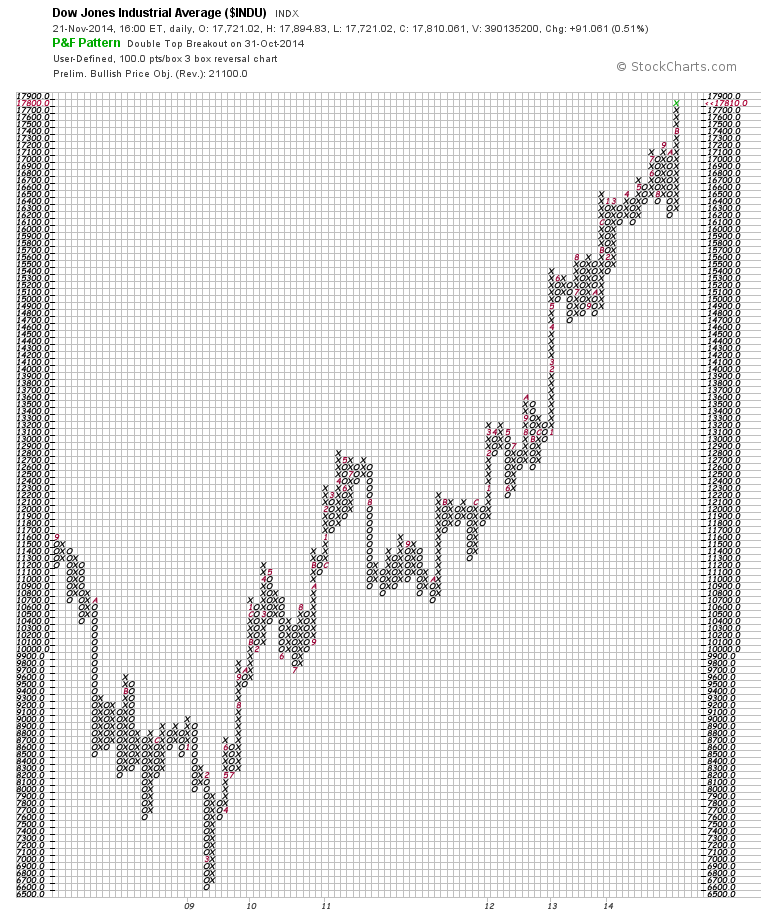 Remember, I did say that the bull market wasn’t over in US indices and that I was only calling a bear leg. That didn’t happen and the fact the market went on to fresh ATH’s confirms the continuation of the bull market.
The S&P is now at 2063 compared with 1964 last time. Here we can see the LCM column being completely reversed and more: 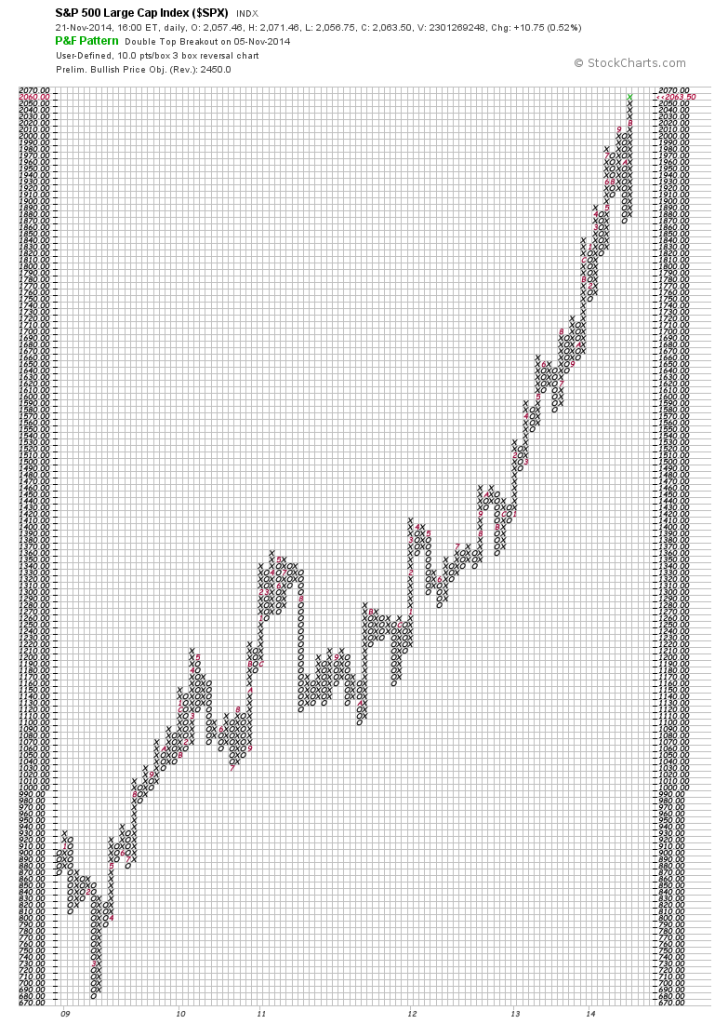 This is rare and perhaps the best way to deal with this is to point out that the last major failed signal on US indices was Coppock in 2002 and we then got excellent Coppock signals in 2003 and 2009 which allowed very big profits to be taken from two bull markets.
I have felt a real sense of surprise amongst subscribers over the aborted LCM signal, but if you think about it, this is the exception that proves the rule. Why is there surprise? It’s because we’re not used to seeing a major signal go wrong in the US. Many of you won’t haven’t seen one before because as I said the last one was twelve years ago.
(c) Robert Newgrosh 2014
All rights reserved. No part of this publication may be reproduced or transmitted in any form or by any means, electronic, mechanical, photocopying, recording or otherwise, without the prior permission in writing of the author.  (So please do not forward it to anyone else)