“The more I practice, the luckier I get”

I’m not a golfer, but this quote sums up how I feel about what has just happened. My Interim Report on 18 July announced that I was going into cash with my pension fund for the first time since May 2009. I gave my reasons, and top of the list was the fact that my target of 17200, set when the Dow was 15761 in November last year, had more or less been reached with the Dow touching 17151. I said that whenever a target is reached, there is a justification for taking your profit and walking away. I explained that it didn’t mean I felt the bull market was over, and that if I was right and the market fell back, I would look to re-enter at some point.

From that intra-day high of 17151 set on 17 July, the Dow has corrected back to 16437. So, was that a lucky switch? Not really. It was based on 28 years experience of watching the markets, setting a target that was 97% captured, and realising that the risk had increased as a result.

So, the question now is, what next? Well, I feel that we have seen a high for the time being and that we have entered a corrective stage which will probably last a few months. However, I want to emphasise again, this is not the end of the bull market – there is absolutely no evidence on the charts to indicate that. I did also mention that one of my reasons for turning defensive was the time of year. Remember, historically the Nov-Apr half of the year tends to be better, and the summer months can be more volatile.

So, the Dow has fallen 631pts since my July report when it stood at 17068, and the current level of 16437 is over 700pts down from the highest point. However, if we look at the chart, we can see that it is still intact as far as the bigger picture is concerned: 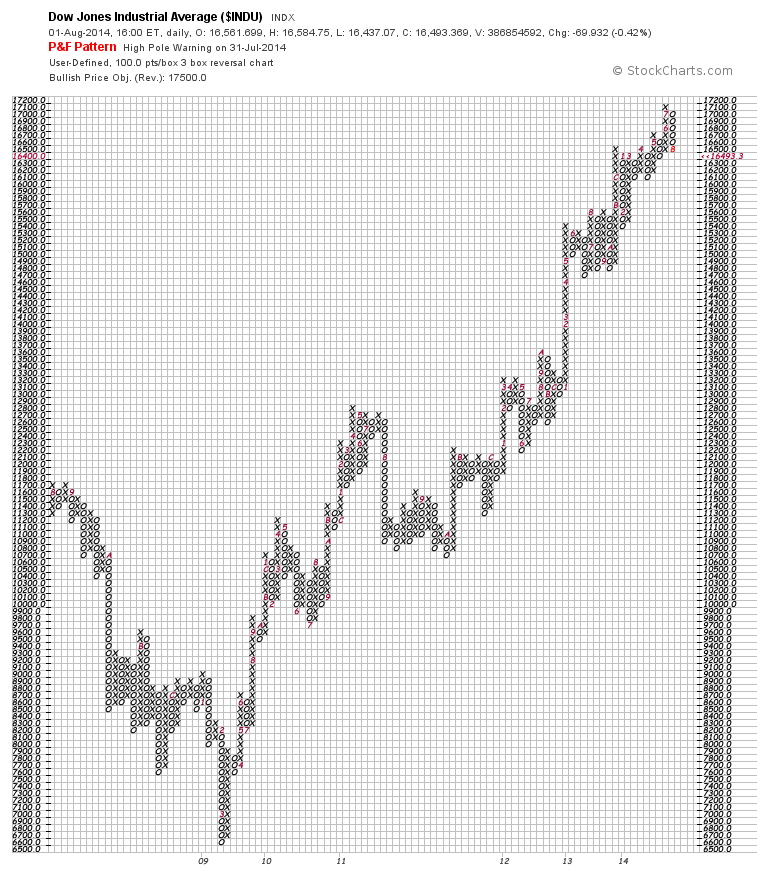 The sharp fall last week has not surprisingly produced a short-term oversold condition, with the extension to the 20 day moving average being -2.8% (i.e. the index is now 2.8% below the ma) and the 7-day RSI at 16. In the next few days that needs to unwind and return to a more neutral level. The 20 day ma is currently at around 16960 and in situations like this a technical bounce often sees a return move to the moving average. Remember though, the moving average is falling, so that is not the level at which the index will meet it, it will be quite a bit lower than that – probably in the 16750-16800 range. At that point the oversold condition will have been unwound, and I would expect a further decline from there.

Last time the S&P was at 1985 and I said “The final column of x’s is looking a bit extended now, so expect another column of o’s soon. This ties in with the fact that the 7-day RSI is 80 so I wouldn’t go chasing it from here” The index has since fallen back to 1925 for another spot-on forecast. Look again at that final column of x’s and compare with previous ones – the incredible simplicity and power of Point & Figure is right there in front of your eyes. You can also see how the correction is well within the extent of others in the uptrend: 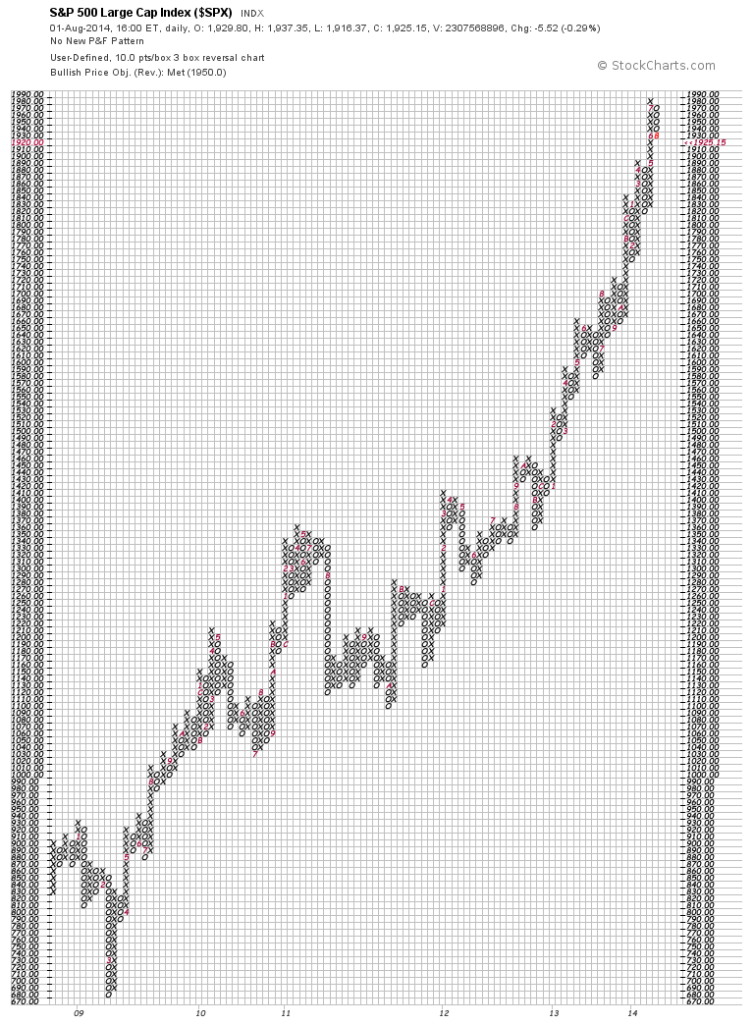 The S&P has been out-performing the Dow for a few years now as I have mentioned many times, so it is not surprising that it has less of an oversold condition than the Dow. The extension to the 20ma is -2.3% and the 7-day RSI is 20. As with the Dow, we can expect a technical bounce followed by another move down.