Volatility still remains very high, with daily and weekly ranges much bigger than the long-term average. You will recall not so long ago that I used to use a figure of 275pts for the average week’s range on the Dow. It is around double that at the moment (last week was 530pts) and this is not just a recent phenomenon – we have seen high levels of volatility for about a year now. The jobs data on Friday helped the Dow to a 459pt range on that day alone.
These moves either look impressive or alarming depending on your position, but it is vital to see them in context. Cue the Point & Figure chart. There is no better way to see the overall picture, and I think that is where the focus should be for this report following the gyrations of the last six weeks. I should perhaps state at the outset that none of that movement has changed my view about this being a new bear market.
At the time of my last report the Dow stood at 16102. It is now 16472 and the chart shows two things very clearly. Firstly, in spite of all the recent volatility, all that has really happened is the Dow has chopped around in a congestion area. It’s easy to lose sight of that when you turn away from the P&F chart. Secondly, you can see the huge amount of work required to take the index back to the highs and how unlikely that is: 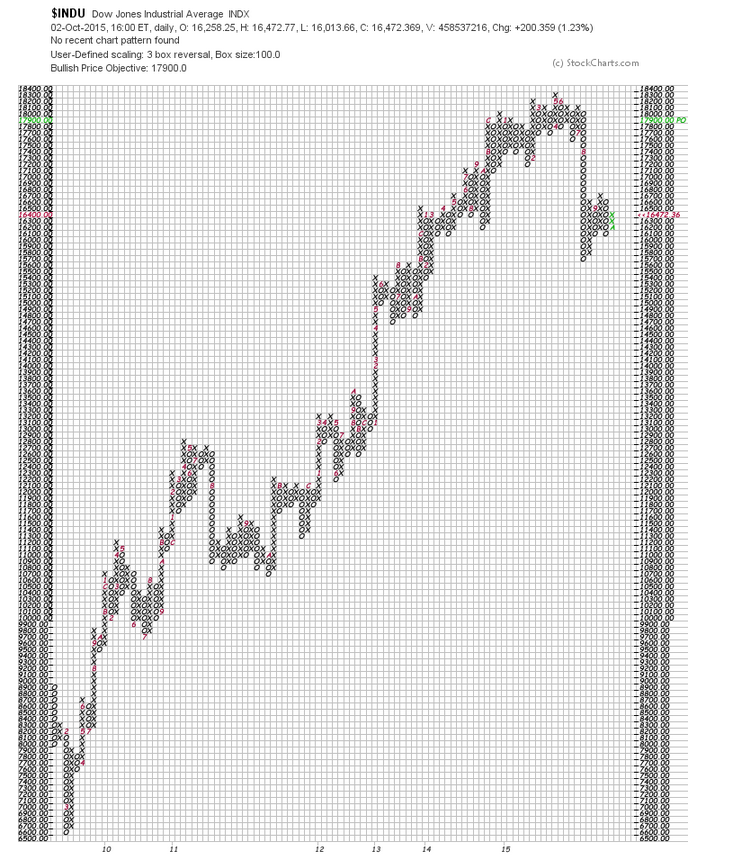 See what I mean about seeing things in context? Friday’s excitement essentially means nothing when you see it on the P&F chart. Have a look at the 50pt chart where the top formation stands out more clearly: 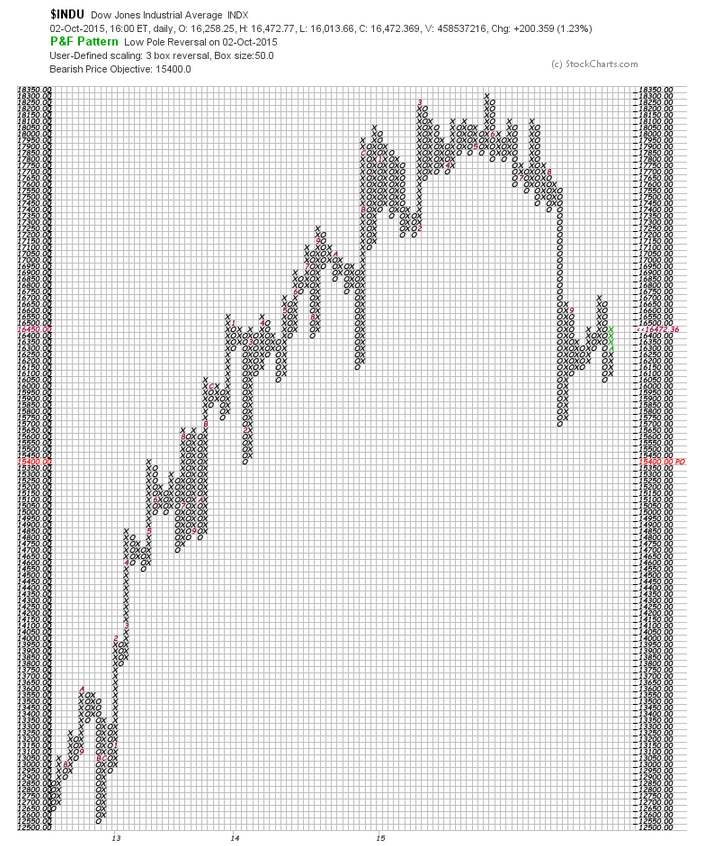 A number of people have asked me about a potential head & shoulders top where the current action is a possible right-hand shoulder. Personally, I don’t tend to label such patterns as H&S tops because the shoulders are too far down from the head and are out of proportion. However, that does not detract from the negative look of the chart.
Last time the S&P500 was at 1921 and it has climbed to 1951. Like the Dow, the recent price action is clearly a congestion area: 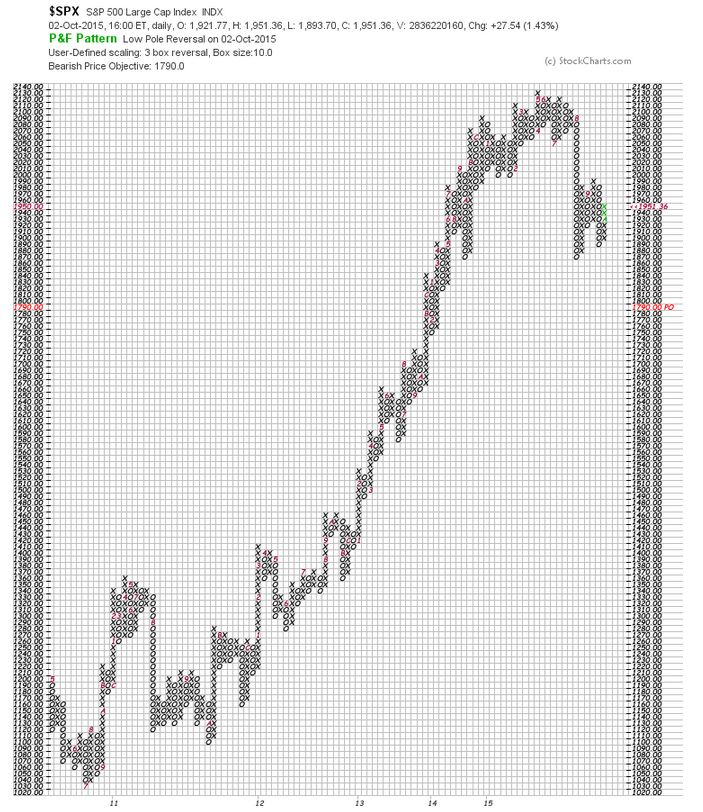 If we reduce the box size to 5pts, you also have a H&S look about the chart, with this one being a bit closer to an acceptable form of the pattern: 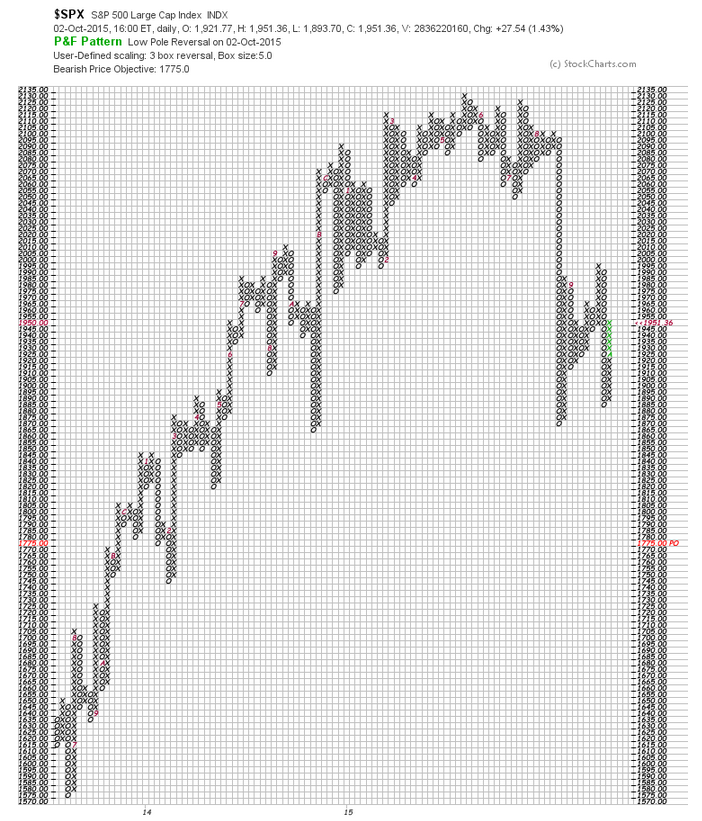 However, I think we already have enough chart evidence in place (Rounding Top/LCM) so as not to need these “H&S” tops, but their completion would of course serve as further confirmation of a bear market.
Four weeks ago the Nasdaq100 was at 4184 and it’s now 4267. We’ve already seen on this chart one of the classic features of a market that’s going lower in the way that support became resistance on the rally: 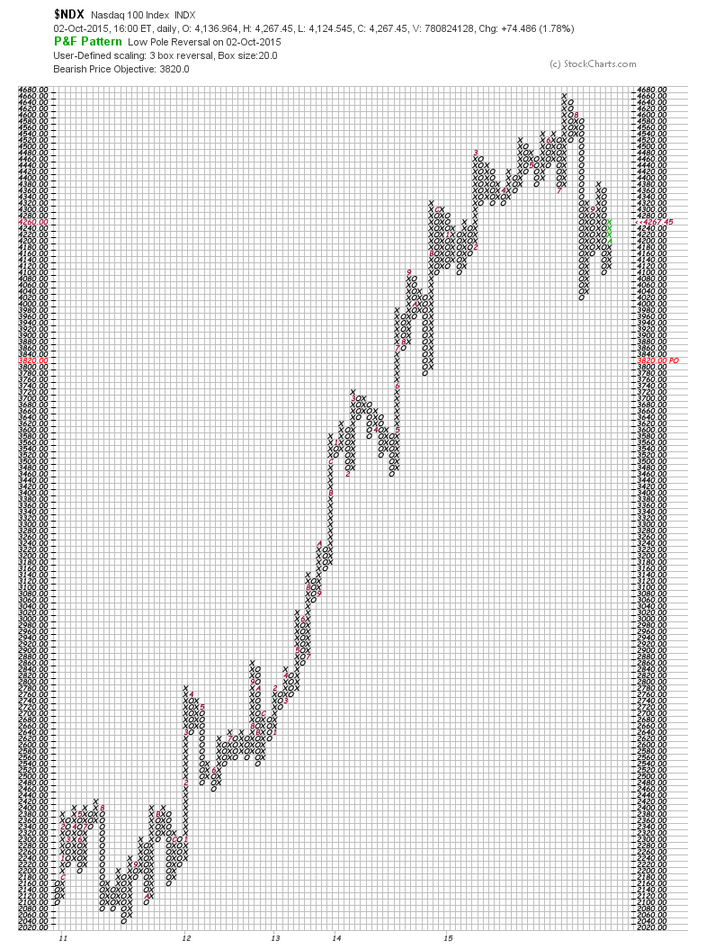 Again, you would have to classify the recent price action as a congestion area. Reducing the box size to see more detail reveals a fairly complex situation but one which overall I would class as a top area:
So, while US indices have rallied a bit since my last report, nothing has changed on the bigger picture as revealed by the P&F charts. Once again, be careful about getting too close to the day-to-day action via bar charts – you can lose your perspective very easily especially in volatile conditions.
(c) Robert Newgrosh 2015
All rights reserved. No part of this publication may be reproduced or transmitted in any form or by any means, electronic, mechanical, photocopying, recording or otherwise, without the prior permission in writing of the author.  (So please do not forward it to anyone else)