Well, what a difference four weeks makes. Since my last full report on 9 August, I have sent out six Interim Reports. I think it would be useful to summarise these here, but first some context. On Monday 17 August, the S&P500 was just 1.3% below it’s all-time high. If the ATH is within touching distance, you are in a bull market. On Tuesday 18th, it was 1.6% below the ATH, and on Wednesday 19th, 2.4% below. That can still be reached quite easily, so clearly you are still in a bull market provided there are no reversal signals or patterns which was the case on that day.
At the close on Thursday 20th, the Dow completed a multi-month top area closing at 16990 and the S&P was more or less there depending on how you drew the neckline. Together they were enough for me to warn that there was a 75% chance we had entered a bear market. Now, let’s look at that again. The earliest possible moment you could have called a new bear market was at the close on 20 August, i.e. 9.00pm. My Interim Report was sent out at 9.34pm. I think that’s a pretty timely response. The following day saw a drop of 3.1% in both the Dow and S&P, and I increased the odds of a new bear market from 75% to 80% in my Interim Report of 21 August.
On Monday 24 August, markets plunged, with the Dow down 1089pts within five minutes of the open, touching 15370. It managed to claw back about half that move ending the day down 588pts at 15871. On Tuesday 25th, it fell a further 205pts to 15666. That evening I sent another Interim Report highlighting Large Contra Moves and predicting retracements from extremely oversold conditions. That started the next day, with the Dow closing 619pts higher, followed by another move up of 369pts on 27th. Further Interim Reports on 1, 2 & 3 September discussed the fact that I was now going to switch out of the US fund with my pension into cash taking advantage of the technical rally. Remarkably, I’m exiting just 1.5% below the fund price at the moment of the top completion. This is in part due to favourable currency movement during that time, but mainly because I didn’t panic at the low and allowed the extreme extension values to guide me and help me keep my nerve.
So, after all the excitement, let’s try to take stock of the situation and see where we’re likely to go from here. Remember, at the time of my original bear market call on 20 August, the Dow was 16990. It is now at 16102. I used a line chart in the Interim Report to highlight the top area as it doesn’t show up as well on P&F, however what stands out a mile now is the subsequent Large Contra Move (LCM): 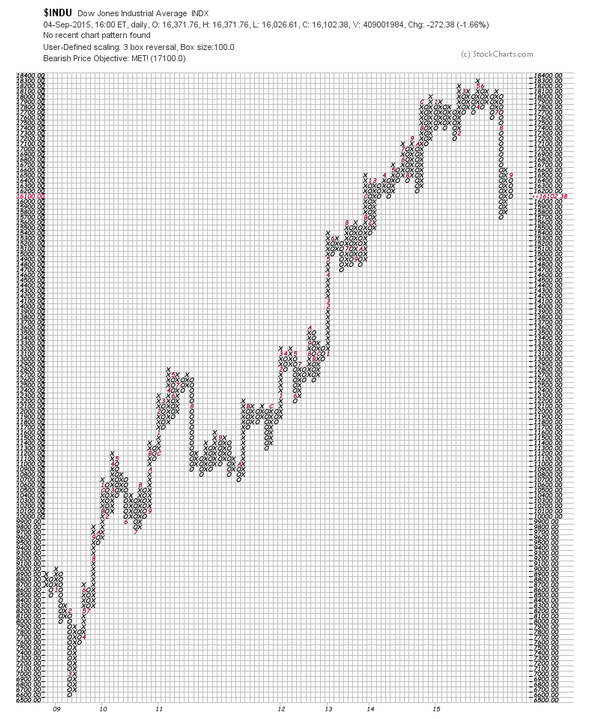 It now looks like we’re getting a congestion area, and this becomes clearer if we reduce the box size to 50pts: 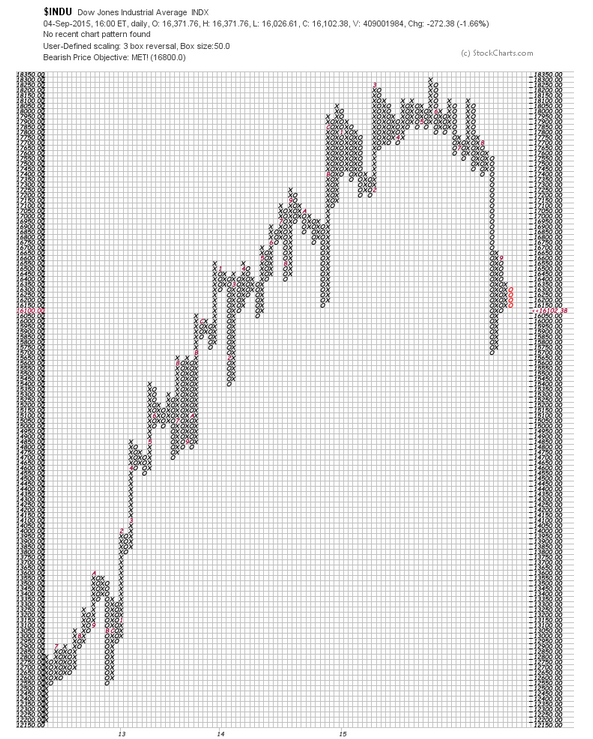 You can also see the multi-month top formation much more easily. Congestion areas are more likely to break in the direction of the previous move, so I’m expecting the index to go lower from here in the next few weeks. My Interim Report on 3 September said that I’d taken a quick look on a line chart basis at all 30 Dow stocks, and I didn’t like any of them – another reason to think that the bull market is over.
The S&P500 was at 2035 on 20 August and now stands at 1921. Again the LCM is very clear: 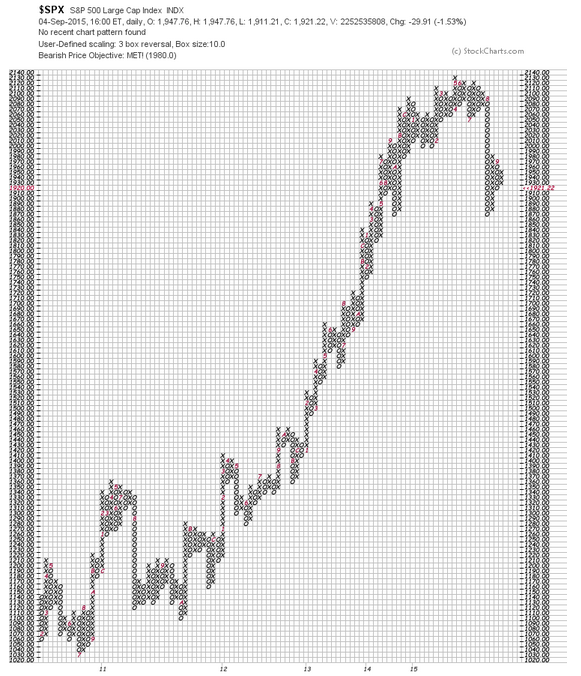 As I said in the Interim Report of 25 August, it’s a much better one than the situation we had last year. This time the size of the column of o’s is about three times the average compared with only twice the average last time. That made it a borderline call as it was the bare minimum necessary to qualify, and as we now know, it wasn’t enough. However, we can look back on it now and regard it as the first crack in the bull market, which managed to hold itself together and limp on for another year. The damage from the current LCM looks a lot worse.
Again, if we halve the box size, we can see a congestion area as per the Dow, and also get a clearer view of the top area: 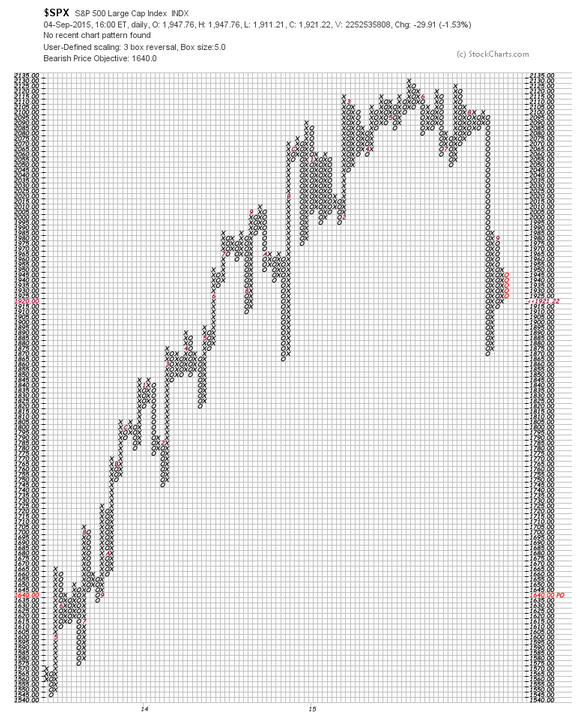 So the evidence from the two leading indices does look pretty clear, and they would have a huge job in getting back to the highs and negating the tops/LCM’s.
The Nasdaq100 is currently 4184 and has a bit of a different look in that there wasn’t really a top area but there was an area of support that has given way and this has acted as resistance for the rally. Like the Dow and the S&P, a congestion area is now forming: 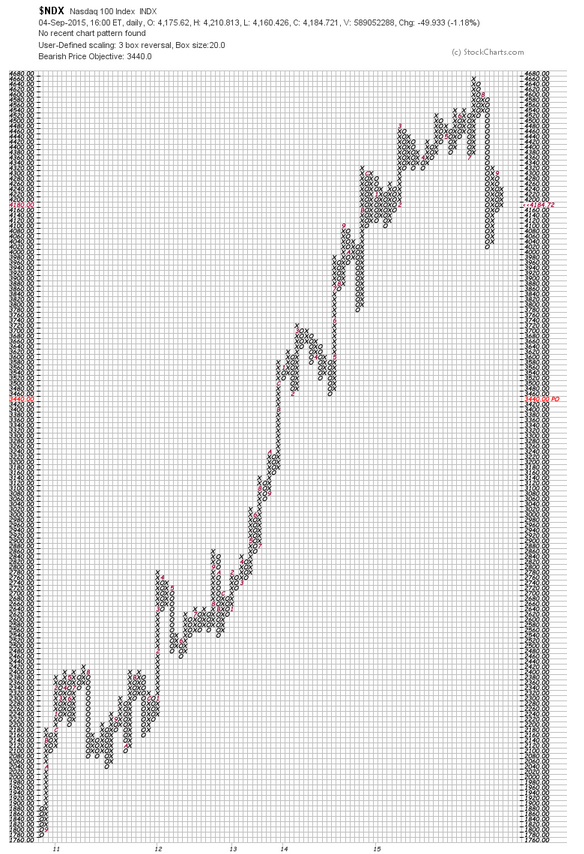 Rather than go down with the box size, if we increase it to 30pts you can see the whole of the bull market and the remarkable consistency in the corrections which has clearly been blown away now by the recent move down: 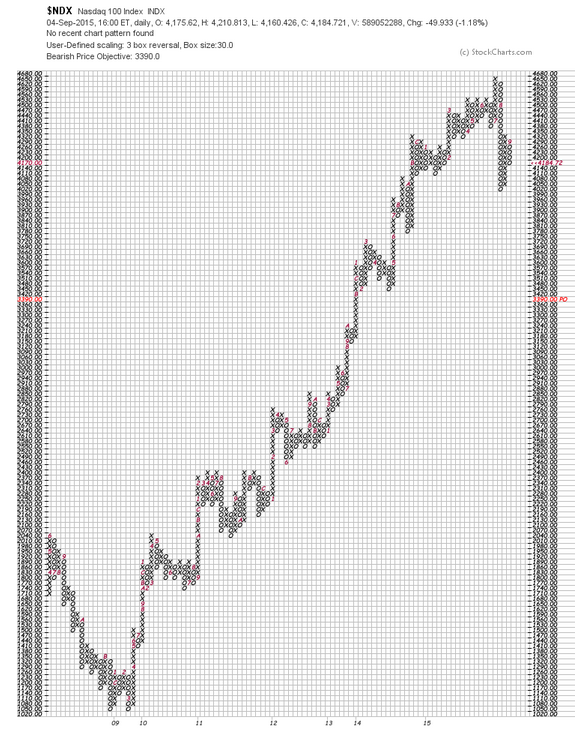 (c) Robert Newgrosh 2015
All rights reserved. No part of this publication may be reproduced or transmitted in any form or by any means, electronic, mechanical, photocopying, recording or otherwise, without the prior permission in writing of the author.  (So please do not forward it to anyone else)