We really do have a perplexing situation with the major indices at the moment. There is no question that the US charts still remain bullish (the Dow and S&P made all-time highs just a few weeks ago) yet they are struggling to make any significant progress. Perhaps we shouldn’t be too surprised – historically this is not the best half of the year for stockmarkets, but I suspect the real reason goes deeper than seasonality. Quite simply, we are asking the market to keep on delivering when the Dow has already gained around 10,000pts from the Coppock signal back in 2009, and the S&P has tripled in value from the low. So it’s not surprising if we’re seeing diminishing returns, and as I’ve said a number of times, we’re now in the seventh year of this bull market which is well past the average duration, and US indices have never been up seven years in a row. Having said all that, we have to come back to the original point which is that all four US charts are still looking bullish. Let’s take a look.
Four weeks ago the Dow was at 18191 and it has slipped back to 17849. While the bar chart has been choppy, the P&F chart is interesting in terms of how little it has moved; notice that following the 5 indicating the start of May, there is just a single x before reaching the 6 for the start of June, so when you strip out the day-to-day noise, this is an index that hasn’t been doing much lately: 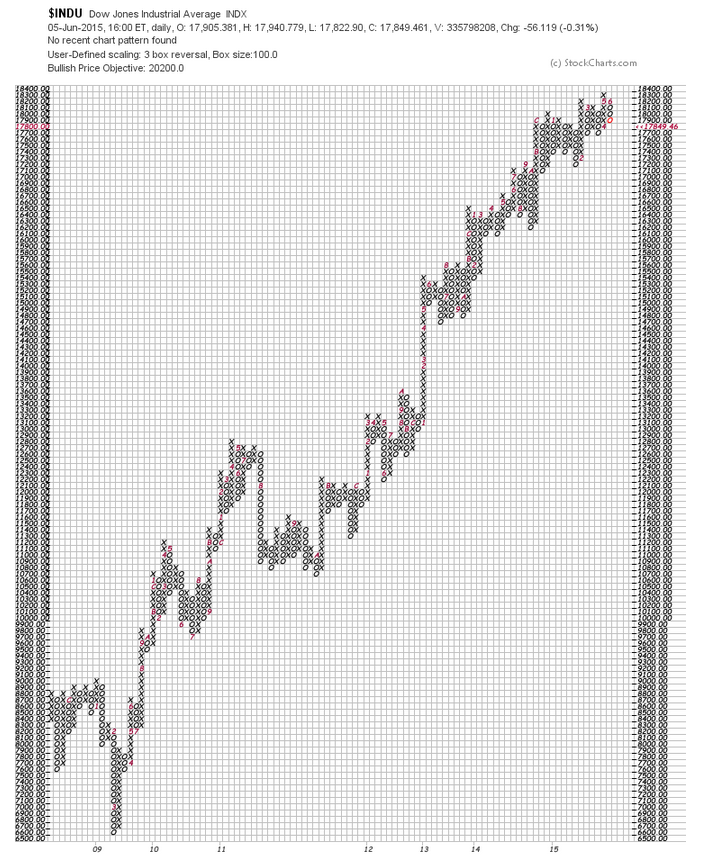 As you can see, on technical grounds, there’s no reason to come out. However, if the lack of progess and the aforementioned factors are making you a bit wary, it would be justifiable to lighten up.
Last time the S&P stood at 2116 and is now 2092. Like the Dow, if you look at the bar chart of the last few months you’d see a choppy, non-directional index yet when viewed on a P&F chart covering the medium to long-term you get a completely different picture: 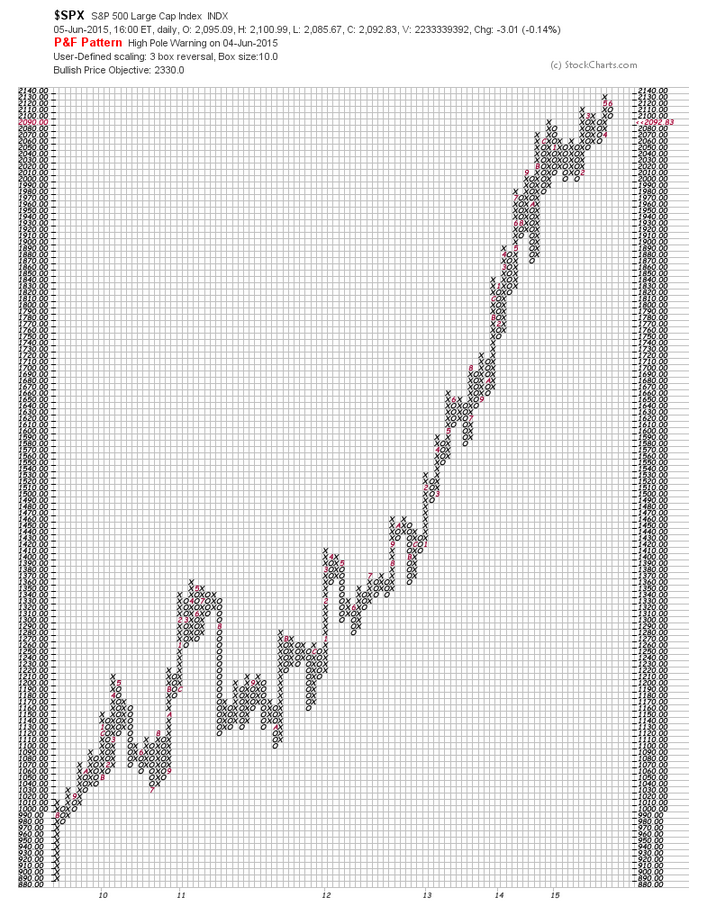 This chart is better than the Dow which isn’t all that surprising given that the S&P has out-performed for a number of years now. Again, purely going off the chart, there is no reason to hold anything but a bullish point of view, but clearly one should not be as bullish at this stage of the cycle as in the first year or two. To repeat, the S&P500 is up around 200% from the low in March 2009 and we have to consider how much more is reasonable or possible?
The Nasdaq100 has also fallen since my last report, down from 4458 to 4477. While not quite making an ATH with the Dow and S&P recently, it has been at a 15-year high, and it isn’t all that far now from the all-time high. So once again, how do you put a bearish interpretation on that? You can’t. While progress has also been slow here, the chart clearly remains bullish: 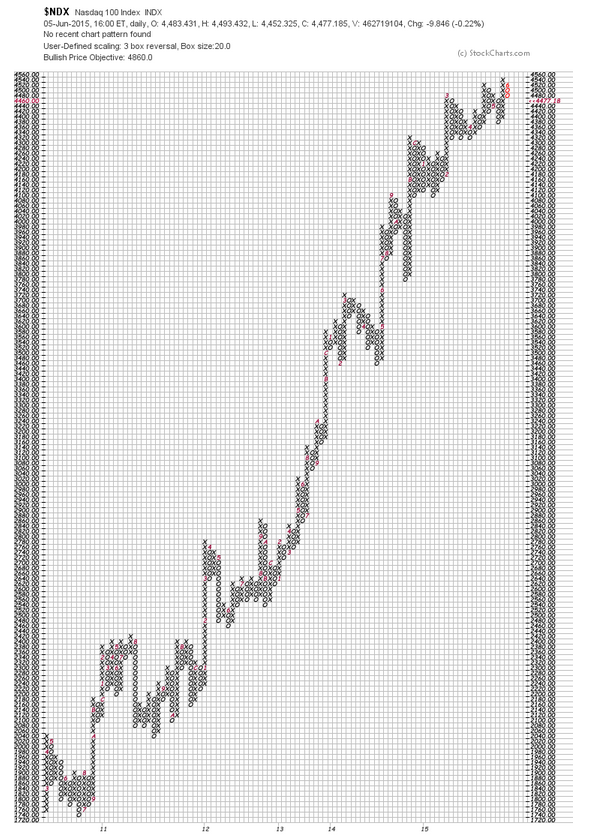 Likewise the Russell2000 which would be impossible to read as anything other than a solid uptrend: 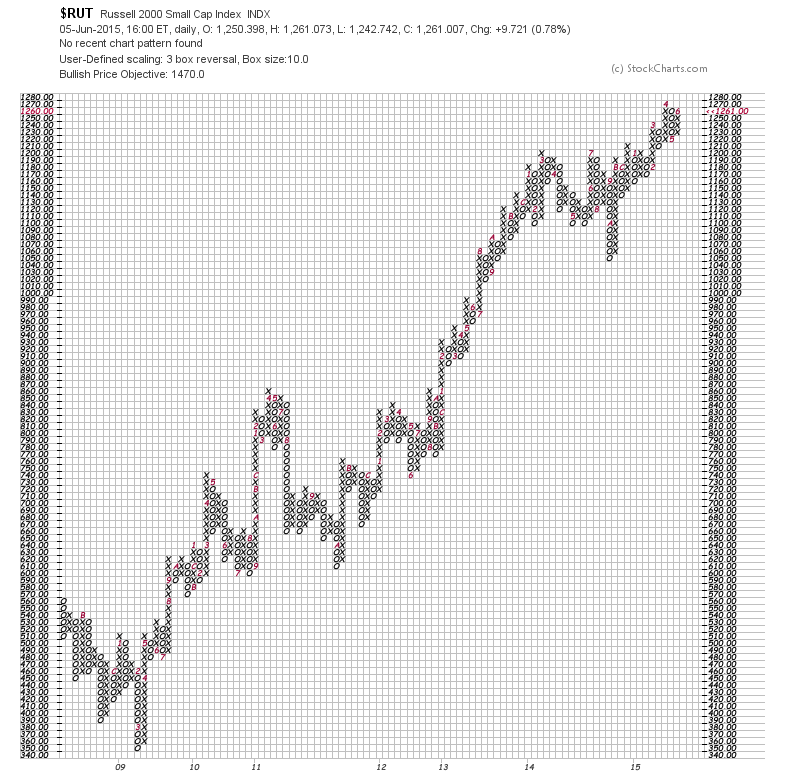 So it’s a tricky situation, and in many respects I’d prefer it if we entered a bear market (having got out of course) than to see it edging upwards in an unconvincing manner. For now I’ll remain 100% in the US fund with my pension, but I am quite prepared to pull out should the charts start to deteriorate.
(c) Robert Newgrosh 2015