“This bull market isn’t over”  Market Report 11 May

I have repeatedly said that I could see nothing to indicate that the (US) bull market was over, and expected the indices to continue higher in the medium-term. Well, as I write, both the Dow and the S&P500 are at all-time highs as per my forecasts. Since my pension is invested only in the US market, that is also at an ATH. 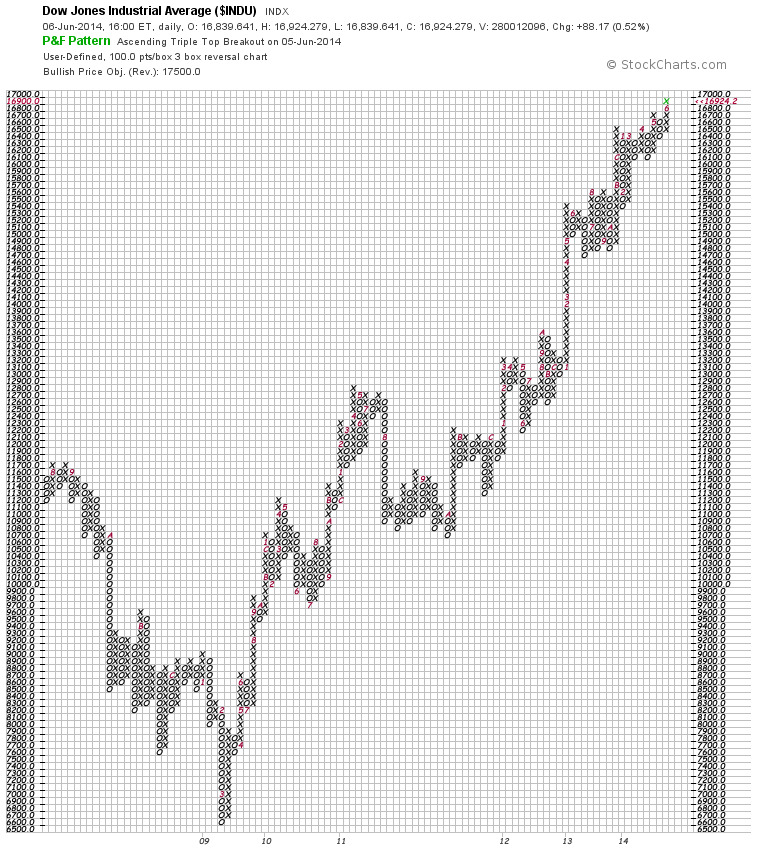 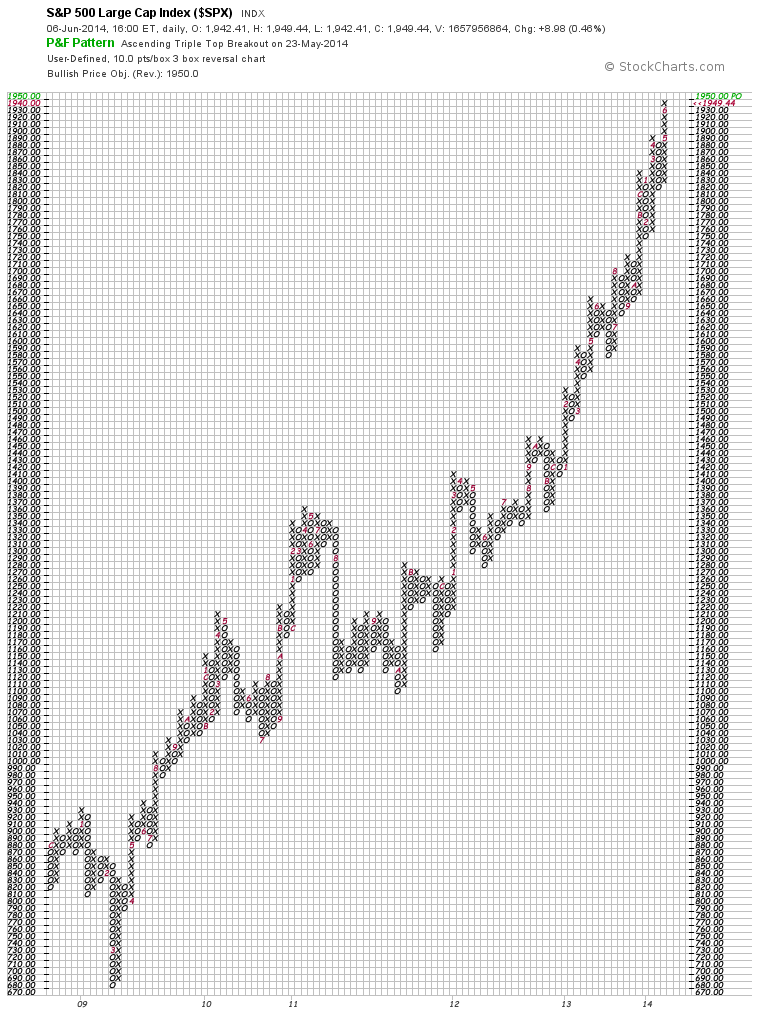 Just one slight note of caution, the 7-day RSI on the S&P is at 87 which is just about as high as it gets. So some unwinding in the short-term is necessary before any real progress can be made from here. The Dow’s RSI is 80 which is also overbought. While the S&P has an extreme reading on the RSI, it’s extension to the 20ma is 2.4% which isn’t all that high. That’s just the way it works sometimes, and why it’s good to have two different methods of calculating short-term conditions.

I really do like CNBC’s US coverage in the afternoon & evenings (as opposed to the UK based coverage in the morning which I find painful) but I just don’t understand what seems to have become the accepted wisdom of the station in recent weeks. They have been saying that a 10% correction on US indices is well overdue. Why? In January, the Dow corrected by 7.3%, so I don’t get the idea of a correction being long overdue. Also, the Dow is only up 2% on the year so far (5.4% for the S&P) so if this is a bull market, then we have a fair way to go in the rest of 2014 to reach a typical gain for the year. Also, the Dow is currently just 6% above it’s 200 day moving average compared with the 12% extension it reached in 2013. So it isn’t stretched on a medium-term basis. So, is the 10% correction idea just wishful thinking on the part of sold-out bulls?

Two things I am thinking about though are the fact that the summer months are when things can get choppy, and will the S&P hit resistance at 2000? So while I don’t agree about a 10% correction, I would be willing to play safe and go into cash to protect my substantial gains if either of those two factors makes me nervous. 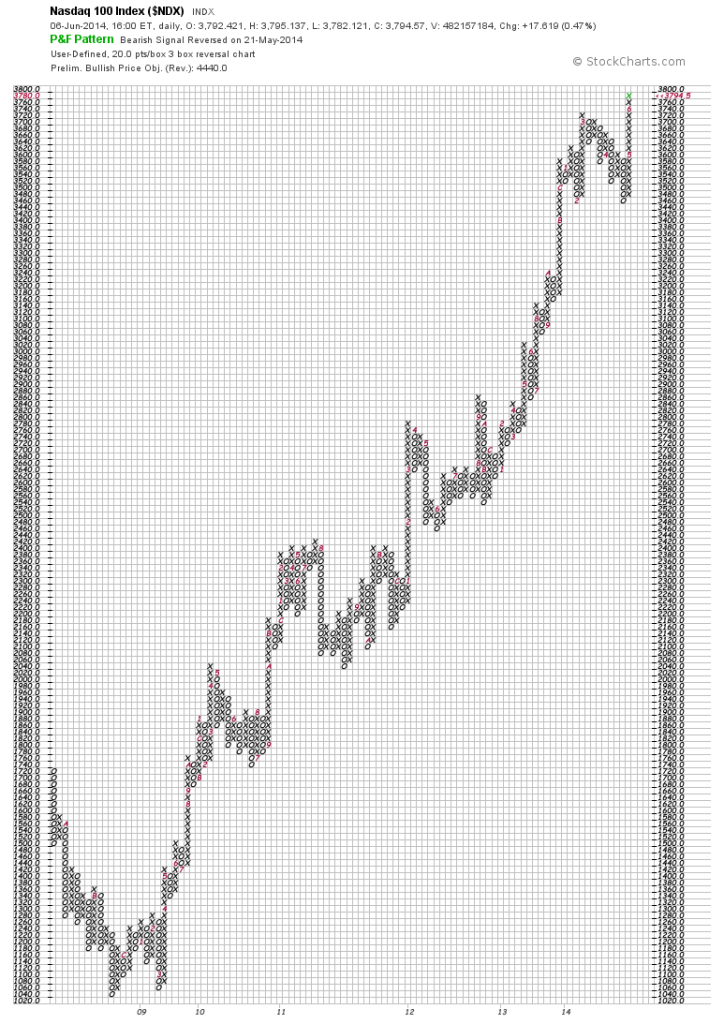 I said last time that it didn’t look likely that the potential H&S top was going to complete (partly because I was expecting an ATH on the Dow) in which case that would be a bullish development. That’s exactly what happened and you can see the detail of how that unfolded on the more sensitive 10pt chart: 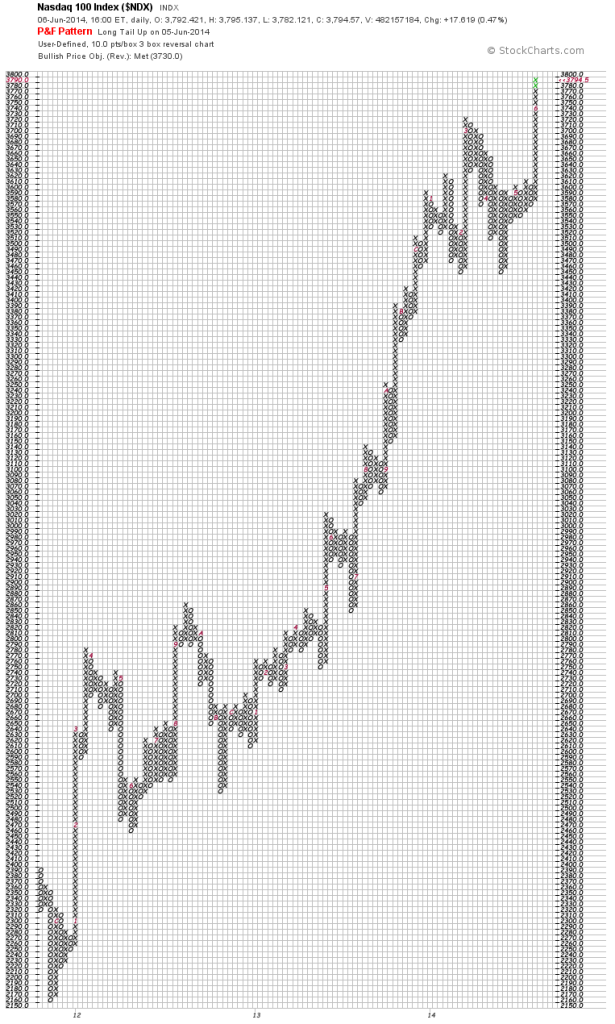 FTSE has moved up from 6814 to 6858 since my April report. After months of sluggish performance it is again looking interesting, but I have made it very clear previously that whereas I am prepared to anticipate on other indices, I need proof with this one. FTSE has shaped up many times with the promise of an ATH, only to fall away while other indices have delivered. However, we do now have a really interesting set-up here. A close above 6880 would be a breakout from a 12 month range. Psychologically, I would prefer to see 6900 to be convinced. That then takes it to within 30pts of it’s ATH at 6930. Take that out and it’s within 1% of the massively important 7000 level. From there, it really shouldn’t come back much below 6900 if the move is genuine, so the closeness of the stop would open up a good medium-term buy & hold opportunity with a very favourable risk/reward ratio. As I said last time, start thinking about this now – the previous ATH was in 1999 and if that gets taken out it would be a highly significant event. Here’s the chart: 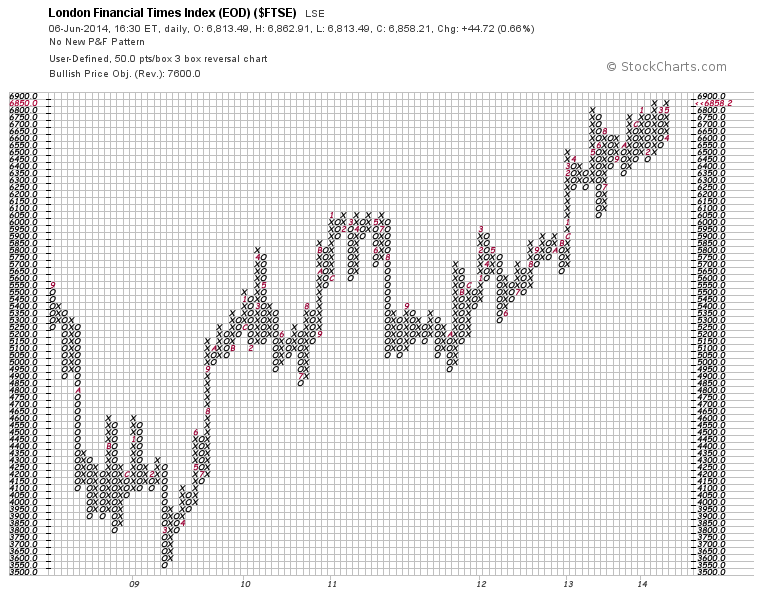 You can see how close it is to breaking out of the range, however the two other factors aren’t something you can appreciate from the chart alone, but keep in mind the potential for this “triple-whammy”.

The five-month H&S top on the FTSE250 failed to deliver. I did say that I didn’t see it ending the bull market in mid-cap stocks because you really need a longer duration pattern for that, and that I was looking for a modest leg down. It did drop around 200pts after it broke the neckline, but then rallied strongly thus aborting the pattern. With technical analysis you have to take the rough with the smooth – if a pattern has a 75% success rate, then it will fail 25% of the time and there’s not much you can do about that other than allow for the possibility via your money management. The fact that the pattern didn’t work has to be seen as a bullish sign, and a further indication that the bull market isn’t over.

The Dax is now at 9987 up from 9581 four weeks ago. In my last report I said that the most likely scenario was an upward break from the trading range which would take the index to an ATH. That’s exactly what happened as you can see here: 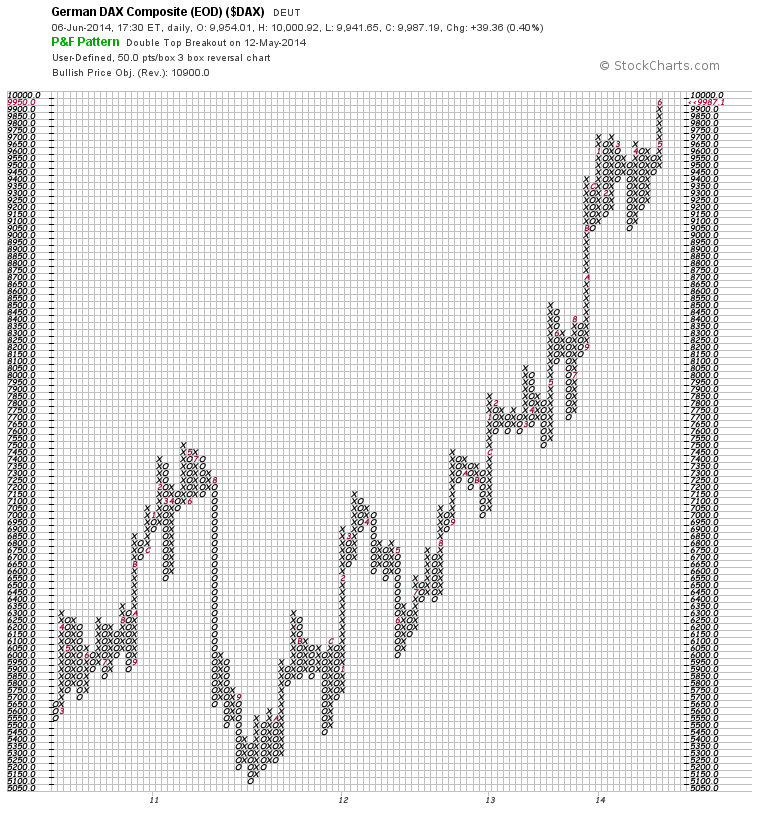 The index looks set to go higher and it’s only a matter of time before it makes it through the 10000 mark.

Gold is now at $1252 which is down from $1289 last time. I’m starting to feel vindicated about my view that Gold’s bear market didn’t end in spite of the rally at the start of the year. The chart still clearly displays the downtrend characteristic of a lower low and lower high, with the increasing possibility of the low being challenged: 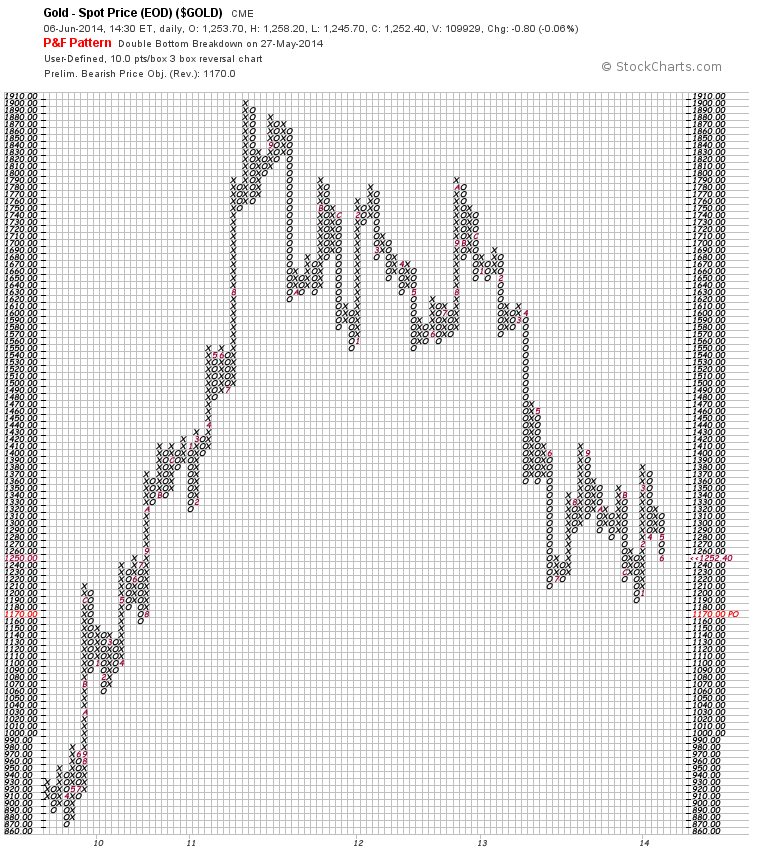 As before, if we look at the Silver chart for any clues, we can clearly see a consolidation area that is very close to breaking lower: 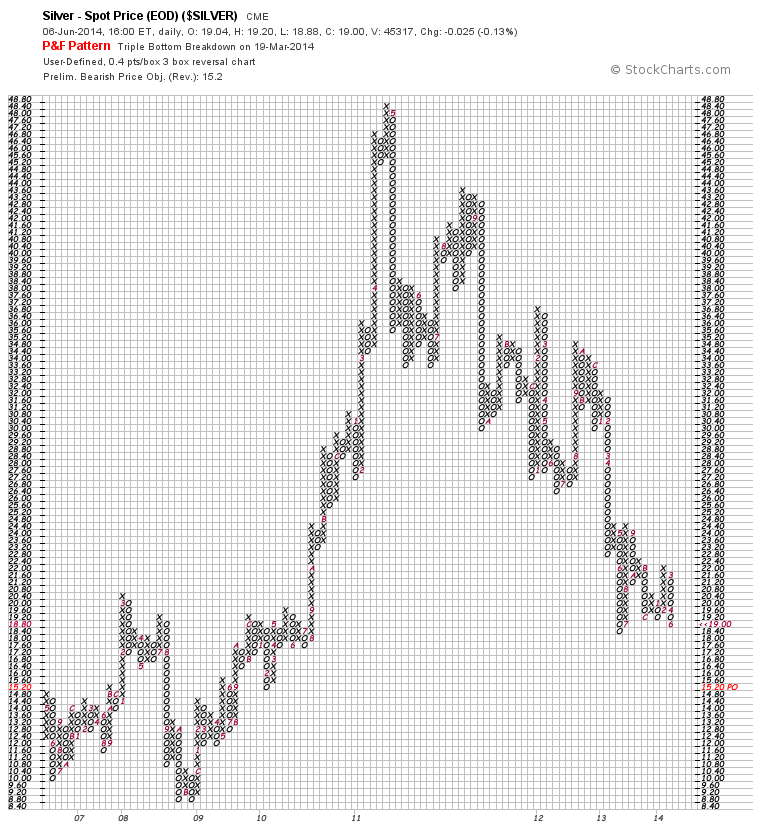 If Silver does break lower, that would be indicative for Gold.