The Retail Sector and the North West: An Overview

It’s been a tough few years for businesses in the North West, and retail is a sector that’s been hit hard.

Now, however, things could be looking up. The North West as a whole is performing well and helping drive the recovery, with positive signs for retail.

In this blog series we will be looking at the retail sector in the North West, its current health and future challenges, and what it takes to survive and grow a retail business.

Retail is a highly competitive sector where businesses must be continually ahead of the game. You have to have an eye on new technologies, sales margins and pricing levels to compete. The aim of the game is to increase sales and retain customers.

It remains the largest private sector industry in the UK, despite the loss of major retailers such as Comet, JJB Sports, Woolworths, Focus, Phones4U and many more in the economic crash.

Figures suggest retail sales are buoyant driven by continued low inflation, giving households greater spending power. But even huge names like Marks & Spencer, Next and Tesco are not immune to the brutal nature of the spending market and the increasingly savvy shopper, with all reporting disappointing recent sales. 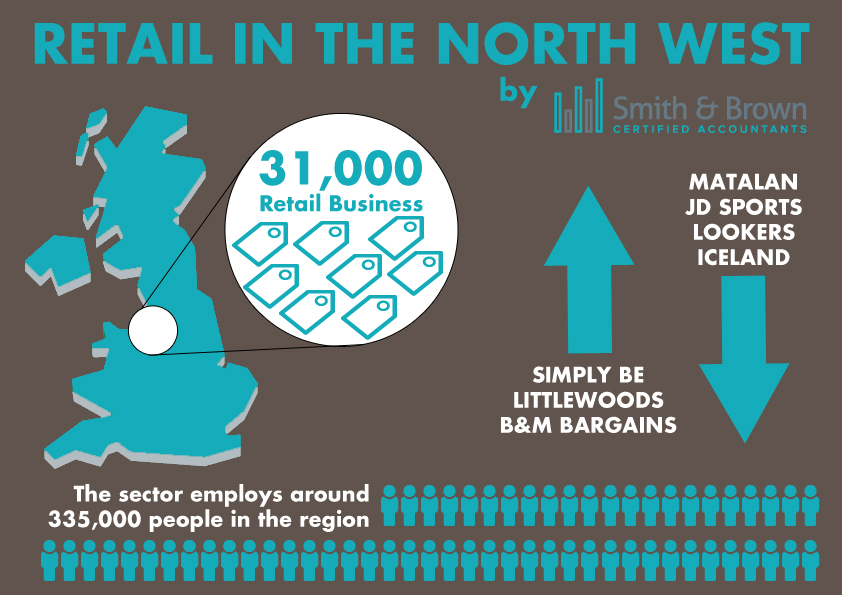 Some of the most useful markers of a retail business’ performance (KPIs) are sales and gross margin, sales per square foot, average customer spend, number of units purchased per transaction, stock turnover rate and sell-through rate.

These can identify performance trends, help to formulate marketing strategies and offers, determine the mark-up percentage for products, and identify effective store layouts.

Keeping track of these KPIs helps determine what is profitable – and what’s not. It helps decide whether you should mark a product down, buy more of it, negotiate a better price from suppliers, buy less or stop stocking it altogether.

This is where a stream of high quality information on KPIs put together in insightful, intuitive reports, dashboards and forecasts is essential. Without access to the right information compiled in an effective way, it’s easy to overlook areas of the business that are unprofitable, or even costing you money.

Ultimately, however, retailers are at the mercy of the consumer, and they are a demanding bunch. Customers want good old fashioned service – and the convenience of new technologies, which we will explore in later blogs.

In the North West there are around 31,000 retail businesses – 12 per cent of local businesses (People 1st Retail Labour Market Review 2013), the highest number of retail businesses after London and the South East. The sector employs around 335,000 people in the region.

Analysis shows the region’s retail is largely driven by home shopping and discount stores. Shop Direct, which owns the Littlewoods brand, and B&M Bargains are both Liverpool-based and significant employers in the region.

In the next blog in this series, we will be looking more in depth at the retail sector in the North West and exploring some marketing tips and advice for retail entrepreneurs.