What’s up with the fracking? 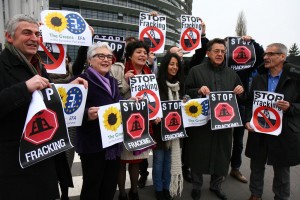 The hugely debated shale gas and fracking issue came under threat once again recently when officials rejected the Cuadrilla Resources shale gas project in the North West. The North of England is a potential gold mine for shale gas, potentially creating the next generation of nuclear power facilities in England.

There is estimated to be huge amounts of shale gas trapped in underground rocks in the North West, which had originally received a lot of national government support to help extract these resources. So it was no surprise when people of the North West thought they were going to become the leaders in the energy sector for Britain in the next few years. But it has not all been smooth sailing; especially now with the latest victim (Cuadrilla Resources) being stopped.

Actually getting to this new resource requires a very invasive extraction, one which most people oppose.  The majority of the shale gas is said to be under the main areas of Manchester, Leeds, Sheffield and York; areas going right across the North of England. More importantly cities which are partially in and very near to national parks. The North of England is home to some of the most beautiful national parks, with untouched landscapes and unbeatable views, making it hugely understandable why many people are against fracking; the hydraulic fracturing used to extract the gas.

Cranes and diggers not only create eyesores but huge amounts of noise pollution. These two factors were the main reasons Cuadrilla Resources shale gas project was refused; with reasons stated as, ‘on the grounds of visual and noise impact’. It’s not just the locals that are getting angry about the proposed fracking to the area, but also environmental groups, such as Friends of the Earth and Greenpeace, who are hugely worried about impacts to the environment and wildlife in local areas.

Earlier this year the coalition government banned fracking from national parks, but since the recent elections there has been talks that the new Conservative government is planning on relaxing these restrictions. Even though the government is now trying to help the projects, there is still a lot of red tape to get through to even begin the fracking process. Cuadrilla Resources spent two years planning their application, which inevitably was rejected.

The application process, regulations and protests from environmental parties really mean the shale gas revolution is a long way off for the North West. This is a delight for many locals and all those around the country against fracking and the damaging of local environments. But the reality is that the North Sea oil and gas reserves are low and in decline, so the UK needs investment and new resources in the energy sector; meaning this shale gas debate is one to keep an eye on.